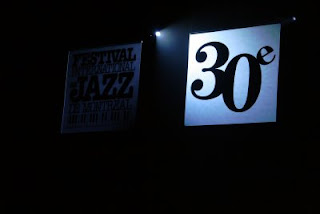 13 - The number of days of the festival this year not counting several preview concert events.

681 -There are 224 ticketed indoor concerts this year and 457 free outdoor concerts, a noticeable increase from past years when there was about a 150/350 split.

36 million - The number of festival attendees from 1980 to 2008, with nearly 25 percent estimated being tourists from outside Quebec, the U.S. and around the world. Yes, this is a destination festival for some, but for many more, it is a huge hometown event.
Posted by Ken Franckling at 7:27 PM