Hot House magazine has published my profile of trumpeter Claudio Roditi in its November issue. Chatting with this multi-faceted musician earlier this month was a wonderful chance to catch up on each other’s doings, having been out of touch over the past decade.
Blending musical fire with deep feeling and precise articulation, two-time Grammy nominee Roditi has been a mainstay on the New York jazz scene for more than 35 years. He is spending a lot of time composing new music, teaching workshops and getting acquainted with his latest brass acquisition – a piccolo trumpet, which joins his arsenal of flugelhorn and rotary-valve trumpet..
Posted by Ken Franckling at 11:46 AM No comments:

Nickelson is a modernist who shows great respect for players who influenced him. He has absorbed many such influences - including Tal Farlow, Jim Hall, Pat Martino and Jimmy Raney - but parrots none of them when delivering his own take on standard fare. His bandmates were bassist Mark Neuenschwander and drummer Ian Goodman. (All three are on the University of South Florida music faculty.)
Read more »
Posted by Ken Franckling at 6:32 PM No comments:

Taking a closer look at new CDs by Gary Burton, The Inventions Trio and Redmond-Langosch-Cooley....
Read more »
Posted by Ken Franckling at 3:54 PM No comments: 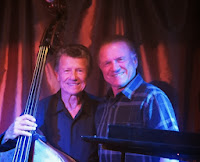 Philadelphia has a wonderful lineage of jazz siblings. Just as the Jones brothers (Hank, Thad and Elvin) burst onto the jazz scene from Pontiac, Michigan, and the Marsalis clan emerged from New Orleans to make their mark on jazz, Philly gave jazz Jimmy, Percy and Albert “Tootie” Heath; Wallace and Antoine Roney; and Kevin, Robin and Duane Eubanks.


It also was the birthplace of jazz brothers Dominic and Joe Mancini. Bassist and alto saxophonist Dominic was a longtime local fixture on the Philly-Atlantic City-South Jersey corridor for many years before moving to Southwest Florida a dozen or so years ago. Steady jazz gigs and golf keep him busy. Joe, based in South Jersey, plays piano three nights a week at Steve and Cookie’s in Margate NJ, where’s he’s been featured for 16 years. He works additional Atlantic City-area gigs on other nights.
Read more »
Posted by Ken Franckling at 10:15 AM No comments: