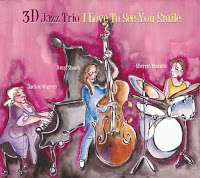 3D Jazz Trio, I Love to See You Smile (DIVA Jazz)
Six years ago when they were backing dancer Maurice Hines’ show Tappin’ Through Life, drummer Sherrie Maricle, bassist Amy Shook and pianist Jackie Warren discovered they had an incredible, instant musical simpatico. Their creativity abounds on this project, I Love to See You Smile. Power drummer Maricle is better known as leader of the all-woman Diva Jazz Orchestra, but she has also put together smaller ensembles from withiin the big band’s ranks. This is one of them. Everything in this varied program swings with joy, from the Randy Newman-penned title track to the traditional Scottish folk song “When You and I Were Young, Maggie.” Favorite track: their take on “Besame Mucho,” the famous bolero by Mexican songwriter Consuelo Velázquez. Warren’s lush classical-styled intro sets up the band’s romp. The Cleveland-based pianist has chops and creativity galore – and they are on full display here. 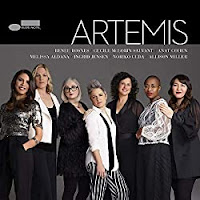 Artemis, Artemis (Blue Note)
Two years after a stunning main stage performance at the Newport Jazz Festival, the all-woman supergroup Artemis has made its recording debut. The band is named for a Greek goddess who was an explorer and goddess of the hunt. The globally rooted band includes pianist and musical director Renee Rosnes, tenor saxophonist Melissa Aldana, clarinetist Anat Cohen, trumpeter Ingrid Jensen, bassist Noriko Ueda, drummer Allison Miller and singer Cecile McLorin Salvant. All of the material here was written and/or arranged by the band’s six instrumentalists. Favorite tracks: Miller’s fierce opening track “Goddess of the Hunt,” the Rosnes-penned “Big Top,” the Rosnes-arranged Stevie Wonder hit “If It’s Magic,” featuring Salvant on vocals, and the band’s transformative take on Lee Morgan’s instrumental jazz chestnut, "The Sidewinder.” This version is more pensive and teasing than the funk-driven original. This is a September 11 release. 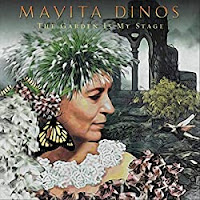 Mayita Dinos, The Garden Is My Stage (Dash Hoffman)
Puerto Rico-born, Los Angeles-based singer Mayita Dinos’ debut recording is a garden of musical delights. How cool that she’s a renowned landscape designer by day – and jazz singer by night. She was able to blend those two passions on this session, which was produced by singer Cathy Segal-Garcia. Every tune here has a nature or garden theme or reference. The opening track is also the most intriguing. Dinos set her own words to Charlie Parker’s “Ornithology.” Other gems: getting back to the garden) through Joni Mitchell’s “Woodstock,” honoring the rose in “Spanish Harlem,” a run through Freddie Hubbard’s “Little Sunflower” and, quite naturally, Billy Strayhorn’s “A Flower is a Lovesome Thing.” Dinos wrote the melody for an ethereal voice-and-bass duet with Gabe Davis that digs into the Federico Garcia Lorca poem “La Lola.” 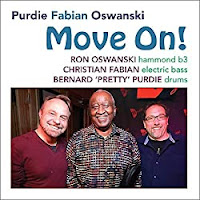 Purdie-Fabian- Osmanski, Move On! (Consolidated Artists)
This one throws a different twist into the organ trio concept, which usually involves Hammond B-3, drums and either guitar or saxophone as the third instrument. Here we have B-3 player Ron Oswanski and bassist Christian Fabian teamed with the legendary funk drummer Bernard “Pretty” Purdie. Besides five Fabian originals, they put their funky stamp on diverse covers of Tower of Power’s “Can’t You See (You’re Doin’ Me Wrong),” Duke Ellington’s “Love You Madly,” Miles Davis’ classic “So What” and even “The Battle Hymn of the Republic.” Producer and principal composer Fabian’s “Got Groove (Pt. 2)” is my favorite, but every track is distinctive and drenched with energy from these three creative melodic improvisers. The result is the funkiest jazz recording I’ve heard so far this year, and it will be hard to beat in that regard. 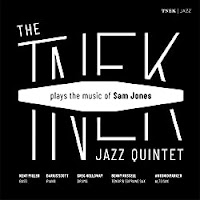 The TNEK Jazz Quintet, … Plays the Music of Sam Jones (TNEK Jazz)
This is a mighty fine – and long overdue – concept recording. It pays homage to music of Sam Jones, a bassist and composer best known for his work in the 1950s and ‘60s with the Adderley Brothers. He also worked fat various times with Bill Evans, Dizzy Gillespie, Thelonious Monk, Oscar Peterson and Cedar Walton – and in the late 1970s co-led a New York big band with trumpeter Tom Harrell. Jones, a Jacksonville FL native, died in 1981. Washington DC-area saxophonist Ron Kearns produced this session, assembling some of his favorite players. Bassist Kent Miller is joined by pianist Darius Scott, drummer Greg Holloway, and saxophonists Antonio Parker (alto) & Benny Russell (tenor and soprano). The unusual band name is an anagram of bassist Miller’s first name. They put their own spin on a range of Jones compositions, from the best-known “Unit Seven” (long the unofficial Cannonball Adderley band theme song) and “Del Sasser” to “Biittersuite,” “Some More of Dat” and the ballad “Lillie.” This hard-swinging recording winds down with Kenny Barron’s “Tragic Magic” from Jones' 1979 trio recording The Bassist. Barron was in that band.
Posted by Ken Franckling at 11:00 AM No comments:

Remember this date - 66 years ago in jazz history

On July 17, 1954, something happened in Newport, Rhode Island that made an indelible mark on jazz history - and in the scope of popular music presentation as we know it today.

Before Woodstock, before Coachella, before Monterey, there was Newport.

A temporary bandshell, covered in thick cardboard, was erected on a berm overlook the tennis courts. As Burt Goldblatt recalled in his book, Newport Jazz Festival, The Illustrated History, the music kicked off at 9:18 that Saturday night when guitarist Eddie Condon's Dixieland band dug into the trad jazz classic "Musktat Ramble."

The festival that first year was estimated to have drawn a combined weekend crowd of 13,000.

Newport was the granddaddy of outdoor American music festivals that were quick to follow.

And all because Newport socialite Elaine Lorillard and her tobacco-heir husband, Louis, wanted to do something to enliven the stodgy summer scene. They hired George Wein, who wan Boston's Storyville jazz club, to produce the event.

Wein, now 94, is still at it. He oversees the Newport Festivals Foundation, a nonprofit that he and other forward thinkers created a few years ago to keep the Newport Jazz Festival and Newport Folk Festival alive well into the future.

Like so many other events near and far, the 2020 edition of the Newport Jazz Festival was shelved because of the COVID-19 pandemic.

The many fans and supporters - and the musicians themselves, are waiting to see how the "new normal" will affect this large-scale outdoor gathering going forward. As a relative latecomer, I've been attending the Newport Jazz Festival annually since 1981, the year Wein brought the storied event back to Newport after a nine-year absence.

Some history on that 1972-1980 absence:
Gate crashers and bear-swilling rowdies not content to listen from the hillside, stormed Festival Field on Saturday July 3, 1971. bring that year's event to a premature end. Ironically, Dionne Warwicke was on stage singing "what the World Needs Now Is Love" when the fences came crashing down. Wein took his concept to New York City.

The festival returned to Newport in 1981 as the city's movers and shakers realized times had changed - and the event could be held at a more controlled setting, Fort Adams State Park, located on a peninsula across Newport Harbor from the downtown business district.