Read more »
Posted by Ken Franckling at 10:21 AM No comments:

The folkies are headed for Newport this weekend, where the 2012 edition of the Newport Folk Festival is an advance-sales sellout for both days at picturesque Fort Adams State Park. That means jazz is just around the corner, with the Newport Jazz Festival set for August 3, 4 and 5. Kudos to George Wein (pictured) and his production team for putting together a diverse array of talent with a continuing increase on younger acts.

The August issue of Hot House magazine is online and includes my profile of bassist Ron Carter (page 31). He's one of the most prolifically recorded musicians in jazz history. He'll be at Birdland with his Great Big Band for a six-night run that begins August 28. He's fresh off a European tour with his trio featuring guitarist Russell Malone and pianist Donald Vega.

Read more »
Posted by Ken Franckling at 11:27 AM No comments:

If You Build It, They Will Come

The South County Jazz Club's weekly jam session at Allegro Bistro in Venice has become a vibrant entertainment staple in southwest Florida, no matter that we are well into the steamy summer off-season. The jam session moved to Allegro in early March, and attendance has been strong, even after the northward exodus of the snowbirds.

Last night's jam was proof positive.
Read more »
Posted by Ken Franckling at 8:53 AM No comments: 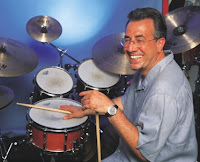 Latin jazz is back for next year's Grammy categories, thanks in large measure to the efforts of New York-based drummer Bobby Sanabria who led the protest charge after that category was eliminated last year, among many others.

Today, Sanabria is using a different forum to show how deeply embedded Latin music is in American musical culture.

Read more »
Posted by Ken Franckling at 9:51 AM No comments:

WGBH needs to revisit its short-sighted decision, not dig in its heels

Last night was Eric Jackson’s final weeknight broadcast and tonight brings Steve Schwartz’s final broadcast as WGBH-FM in Boston retools (deeply cuts and moves to weekends) its jazz programming. That is sad indeed, unless station management takes a step back and admits it made a mistake. (Sadly, I fear radio executives never admit they were wrong about something).

But maybe last night’s heavily attended jazz funeral and protest outside the station, led by musician Ken Field, will prompt a reconsideration. I doubt it will happen, but the optimist in me hopes it does.