Art Pepper, The Art History Project (Widow’s Taste)
The alto saxophonist Art Pepper spent 15 years in and out of prison and/or rehab because of addiction and drug busts, yet 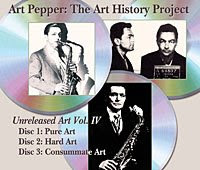 made an indelible mark on jazz for the sometimes-frantic beauty of his playing. While his available earliest recordings remain some of his finest, this three-disc compilation of primarily other material, produced by widow Laurie Pepper, has much to offer for Pepper compleatists.

Disc One contains early West Coast material, dating to 1950 when he was a featured soloist with the Stan Kenton Innovations Orchestra. The highlight is the ballad “Patricia,” which Pepper wrote for his daughter.

All but one track (“Chelsea Bridge” from the Buddy Rich album Mercy, Mercy) on Disc Two are from 1964 - rehearsal tracks recorded a few weeks after his release from his first stint in San Quentin Prison. Stylistically, they are a bit ragged and free.

Disc Three held the most interest for me, because it captures Pepper in the last five years of his life. Four of the seven tracks are previously unreleased and the others had very limited release.

It opens with a smoking version of “Caravan recorded live in Japan by his comeback band. Most others were recorded during performances in Paris, at the Bach Dynamite & Dancing Society in Half Moon Bay, Calif., and at Fat Tuesday’s in New York, and two were recorded with Jack Sheldon for Japanese release. Besides “Caravan,” the standouts are “Lost Life,” which Pepper wrote in prison, and “Landscape” and “Mambo Koyama.” The latter two were from the April 1982 Fat Tuesday’s gig with pianist Stanley Cowell, bassist George Mraz and drummer Ben Riley just two months before Pepper’s. death at 56.
Posted by Ken Franckling at 11:39 AM