Steve Kuhn, Mostly Coltrane (ECM)
Pianist Steve Kuhn has teamed up with saxophonist Joe Lovano for this exquisite recording, which captures the majestic scope of John Coltrane’s music – and imbues it with creative delicacy from Kuhn’s f 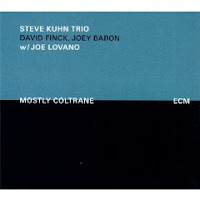 ertile imagination and playing. Both men have good reason to do this: A young Kuhn spent eight weeks in the winter of 1960 as the original pianist in Trane’s quartet; and Lovano has been a foremost Coltrane disciple throughout his own prolific career. They tackle 11 well-considered tunes written or recorded by Coltrane (including ‘Song of Praise,” “Crescent,” “The Night Has a Thousand Eyes,” and “Central Park West”) with the quartet, featuring Kuhn’s regular band mates David Finck on bass and Joey Baron on drums. The pianist also adds two lovely original solo pieces “With Gratitude” and “Trance.” 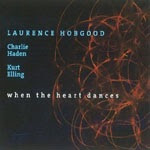 lexity of texture, simplicity of center – and nobility” of Haden’s bass playing. Similarly, it showcases Hobgood’s exquisite touch, imaginative and introspective piano work, and his talents as an arranger and composer (soloing on two originals, including the gospel-meets-new age work “Sanctuary”). He and Haden dance around the basic elements of “Que Sera Sera,” barely touching its distinctive melody. And then there’s Elling’s instrumental approach to singing, which is showcased on Haden’s elegiac “First Song,” “the chestnut “Stairway to the Stars” and the Ellington/Strayhorn classic “Daydream.” This is one to savor. This is an August 11 release.

George Benson, Songs and Stories (Concord Jazz/Monster Music)
Singer-guitarist George Benson’s latest recording adventure turned into a party with a lot of special guests as he blended balladry, R&B and funk into tunes from songwriters from many genres over the pa 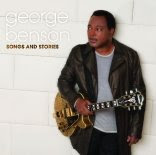 st 50 years. There is much to savor here, including his Brazilian take on James Taylor’s “Don’t Let Me Be Lonely Tonight,” a duet with Lalah Hathaway on "A Telephone Call Away,” which Bill Withers emerged from retirement to write for this project, and Smokey Robinson’s “One Like You.” One surprise is 10-time Grammy-winner Benson’s instrumental cover of Christopher Cross’s sometimes-maligned pop hit “Sailing.” Without vocals, other than a hint of scatting, this take reveals a new sense of beauty. This is an August 25 release.
Posted by Ken Franckling at 6:18 PM