What would you call it?

That’s the only word that seems to fit this year’s primetime Sunday night glitz that was the 53rd annual Grammy Awards.

If you saw it, you know what I mean. If you missed it, you didn’t miss much, trust me.

Sure, there were scattered poignant moments – beginning with the opening tribute to the ailing Aretha Franklin.

But they were outweighed by the sheer spectacle of the night and artists who felt they had to make spectacles of themselves, starting with Lady Gaga’s eggular entrance. What? And then her blatant performance ripoff of Madonna’s “Express Yourself” in the guise of “Born This Way.” And how about the bicycles zooming around the stage near night's end? And the heavy use of the bleep button by the network censors all night long.

But let’s look at the important stuff, to me anyway, the jazz side of the night – two pro

- Esparanza Spalding’s first win by a jazz performer of the Grammy for Best New Artist was most welcome – and came out of left field. Particularly since the singer and bassist didn’t even have an album in the running this time. (Her third CD is just out on Head’s Up International). And today, that upset had the legions of fans of the $100 million teenypopper Justin Bieber atwitter with their outrage. I say, quality music prevailed. And to quote Ozzy Osborne at the end of the new Best Buy commercial “What’s a Bieber?”

Here’s the affront to jazz that took place moments later.

- Do you get outraged when your given a serious listen in a jazz club to a great band – and two or three people at the next table won’t shut up, oblivious to the music?

That happened last night when Spalding was performing with the Grammy student jazz ensemble. Two folks on stage – one of them a high-ranking exec from The Recording Academy – blathered on about their programs. Wouldn’t it have been nice if they’d shut up and given the millions who’d never heard of the 26-year-old Ms. Spalding a chance to hear the music she’s made of?

But, hey, we are talking Grammys. Why should I be optimistic something like that will ever happen.

And isn’t it curious that they can only find time to bestow 10 of the 109 awards during the 31/2-hour prime time event.

Despite those failings, jazz did show itself well in the pre-telecast portion.

Kudos to the winners:

The Montreal International Jazz Festival’s innovative programming is one of the creative charms that keeps jazz fans coming back for more. Every year, there’s a new twist or musical pairing that makes its presentations stand apart from other venues.

It’s a staggering jazz festival just in the quantity of its 600 or so performances. But the quality puts it over the top as what I consider the world’s finest jazz festival. It runs like clockwork, draws most of its audience from greater Montreal but also reaches out to media and jazz fans from across North America and around the globe.

Tickets went on sale yesterday for one of the treats at this year’s 32nd annual festival, scheduled June 25 through July 4 in downtown Montreal’s Place des Festivals (the larger venue surround to the Place des Arts).

Singer-pianist Diana Krall,made her Montreal debut in 1995 with a 10-night club residency celebrating the music of Nat King Cole. Canada's native daughter, from British Columbia, returned in 1998, 1999 and 2004 for major venue concerts. The last one was a gala celebrating the festival’s silver anniversary. (Husband Elvis Costello was an unbilled but not surprising guest.)

This time, Krall is flying solo. Just her and her piano, for a three-night solo run in Théâtre Maisonneuve, on June 26, 27 and 28. It is part of the festival’s En voix series celebrating the masters and rising stars of the vocal art. It’s a major twist from past Montreal performances, particularly her 1999 appearance, which had 30 other musicians taking part.

Another coup for Montreal – the three-night residency. Now that she’s among the jazz elite, Krall rarely plays multiple nights in the venue.

Just from that first night array, this figures to be another memorable year for the festival.

Posted by Ken Franckling at 6:18 PM No comments:

thful enthusiasm. That’s not a bad thing. A smattering of White House jazz gigs and performing at President Obama’s Nobel Peace Prize concert were a help.

So, too, will be her high profile at the 53rd annual GRAMMY Awards in L.A. on February 13.

Spalding will perform on the show, and will co-host the Pre-Telecast Ceremony with singer Bo 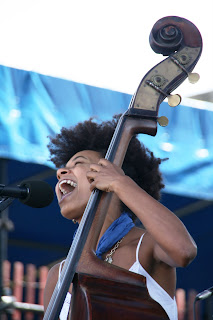 Spalding also is one of five nominees for Best New Artist. The other nominees in that category are Justin Bieber, Drake, Florence & the Machine, and Mumford and Sons. Spalding is the first jazz artist to receive a GRAMMY nomination for the Best New Artist mainstream category in 35 years. Whether or not she wins, the attention may take some of the edge off the current Bieber Fever sweeping America. That would be terrific.

It seems ironic that Spalding is up for Best New Artist, but was not nominated for any of her recordings. But hey, we’re talking the GRAMMYS. There’s always something unfathomable there when it involves jazz.