Underscoring what jazz is...

Every once in a while, it is good to get a healthy reminder of what jazz is. Some people think it is a repertoire of classic material, be it beloved jazz standards or pages from the Great American Songbook.

But jazz is not specific material, though we all have favorites we like to hear now and then. It is the way a band plays a song. Any song. Originating in any genre.

The reminder that jazz is a process - and an intense form of communication between the musicians on stage shared with the listeners privileged to be there - was on full display Thursday, September 22 at The Grill at 1951 in Port Charlotte FL.

In addition to his own projects and teaching, Atlanta-based Potter is the drummer in vibes player Jason Marsalis's touring band.

To get into the audience's comfort zone, Retro Groove opened with a few jazz classics: "Have You Met Miss Jones?," Thelonious Monk's infrequently heard "Shuffle Boil" and Antonio Carlos Jobim's bossa nova "Wave" before shifting to the 1979 Deniece Williams R&B hit "Why Can't We Fall in Love?" They closed out the first set with Ornette Coleman's "When Will the Blues Leave?"

The Deniece Williams hit was just a hint of what was to come. Potter's choices in the second and third sets were all extended instrumental versions of beloved songs from more popular repertoires - including pop, hard rock, R&B and in one instance, movie music. Most came from his newest recording, Retro Groove, which was released in March on Square Biz Records.

Their take on the Chaka Khan hit "Through the Fire" preceded Steve Winwood's "Higher Love," on which Nashville-based Alvarado unleashed an extended solo reminiscent of Sonny Rollins' stream-of-consciousness journeys into a song's possibilities. His approach was consistent throughout the night.

Then came the Whitney Houston hit "Saving All My Love For You," composer Jon Williams' "The Flying Sequence" from the 1978 Superman movie starring Christopher Reeve. Living Colour's "Cult of Personality was a spotlight for Johnson's keyboard chops.

Retro Groove closed the night with Potter's arrangements of three more gems: the Michael Jackson hit "I Can't Help It," The Isley Brothers' "For the Love of You" (later covered by Houston and many others), and Peter Gabriel's "In Your Eyes."

In each case, extended solos delved into the music's possibilities. Potter's swinging groove and imagination were at the heart of it all.

Posted by Ken Franckling at 12:09 PM No comments:

Here is a rundown of noteworthy jazz events, principally in the Sarasota to Naples territory, from now through November. Keep in mind the reality of COVID-19 protocols, expect possible cancellations, and mask up to keep yourself and others safe. 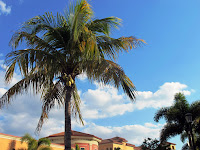 Musician friends, family and friends, and students from near and far packed The Barrel Room at Twisted Vine Bistro in downtown Fort Myers on Thursday night, September 1, for a jazz night unlike any other the venue has seen.

They were all there, standing room only through the first set, to celebrate the musical legacy of trumpeter and educator Dan Miller, who died unexpectedly on August 19 at age 53.

The Barrel Room has been the Thursday night home for the past six and one-half years of the Dan Miller-Lew Del Gatto quartet, that also included bassist Brandon Robertson and drummer Tony Vigilante. The venue's Thursday night jazz will carry on, led by Robertson.

On this night, longtime friend Bill Dowling was on trumpet. The quartet brought up a succession of guest musicians, beginning with Dan's younger brother, David Miller, on trombone.

Two ballads were requested by or dedicated to Dan's longtime sweetheart, Judi Woods: "These Foolish Things Remind Me of You" and later, "Tenderly." Both were beautiful features for Dowling's trumpet artistry.

Robertson noted at one point that while he graduated from Florida State University with a master's degree in music, "Dan gave me a doctorate in life."

Judi Woods announced that this informal tribute was just a warmup for a bigger celebration that will be held in a larger venue when details and logistics can be worked out.

She is setting up a 501(c)(3) nonprofit called the Dan Miller Jazz Master Memorial Scholarship Fund to carry on Dan's legacy of paying it forward. It will be used to provide funds for instruments, jazz camp tuition, lessons and perhaps scholarships for young jazz students who need financial help.

Del Gatto told the crowd that the tip jar that evening wouldn't go to the musicians, but would be set aside for the fund. By night's end, the large glass bowl was nearly full.

Posted by Ken Franckling at 1:19 PM No comments: