Is it something in the nearby salt water? Much more likely is the strength of the local music programs at the secondary level – and in the schools that feed up to it.

· First Place went to the Dillard Center for the Arts in Fort Lauderdale.

The top placing bands performed with Wynton Marsalis as a soloist followed by a performance by the 15-piece Jazz at Lincoln Center Orchestra at Frederick P. Rose Hall in Manhattan.

Congratulations to the winning bands and all of the winning soloists and sections of players who won supplemental awards.

Brendan Thomas was one of six winners in that regard from Foxboro High School in Massachusetts. He stood out in my eyes by winning Outstanding Tripler - on Tenor, Alto and Clarinet, as well as the 10th Essentially Ellington Writing Contest. The contest invited students from all participating high schools to submit a nonfiction personal essay or fictional short story based on interpretations of the stories jazz musicians tell with their music. His essay was printed in the festival playbill and a seat in Rose Theater will be engraved in his honor.

Posted by Ken Franckling at 11:40 AM No comments:

A musical version of build it and they will come… (updated)

If you look for jazz you can find it, sometimes even in most unexpected places and at unusual times. In this case, it was while honeymooning in Key West, a tropical pa 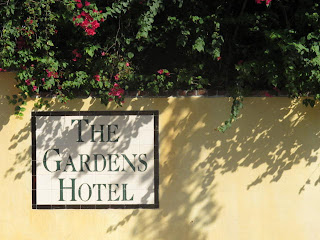 rty town that rivals New Orleans for its partying spirit, but not the depth and breadth of its music. At least that’s the perception of some outsiders.

Kathie and I found it a block from Key West’s so-called Duval crawl – the stretch of bars and clubs along Duval Street, which crosses downtown from the Gulf of Mexico a dozen blocks or so to the Atlantic.

“Jazz in the Garden” is a Sunday evening series that runs from 5:30 p.m. to 8 p.m. amid the lush tropical flora at the Gardens Hotel, a 17-suite former estate at the corner of Angela and Simonton Streets.

On May 1, singer-pianist Lenore Troia was featured in a trio format with saxophonist Marty Stonely and drummer Richie Ciavolino. The music was laid back more often than not, with a tropical and Brazilian flair as Troia blended originals, a few Jobim tunes and some standards. Her clever originals included “Sand Dancing,” “Symptoms of Love” and "Point Me South I-95.” There was also a spirited jazz cover of The Doobie Brothers’ “Takin’ it to the Streets.” 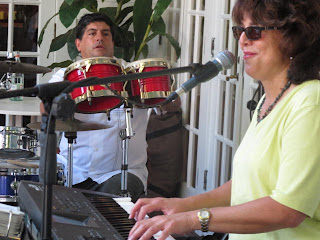 no doubt appreciate its lack of cover, its homey ambience, innovative wine bar and, for at least one woman, a chance to cool off in the hotel pool a few steps away.

Troia, who was raised in Connecticut, has called Key West home since the early 1990s. In addition to performing regularly at Jazz in the Garden – and many other clubs in various contexts, she also books the Gardens Hotel series.

“I get the cats in here who can really play,” she said between sets.

Troia and others who play or dig jazz can also be found most Monday nights for a weekly jam at the nearby Green Parrot Bar on Whitehead Street. The Green Parrot also features the blues on Sunday nights.

Keep both venues in mind next time you’re in the area.

Posted by Ken Franckling at 7:36 PM No comments: