Mechanics Hall in Worcester, Massachusetts is historic, elegantly preserved and remains a great contributor to the region’s arts vitality. Built in 1857 in the heart of central Massachusetts, it underwent a restoration more than 30 years ago to show off its acoustic and visual grandeur.

The Blue Note jazz catalog is just as historic to jazz fans, elegantly preserved since the label’s founding 70 years ago by German immigrants Alfred Lyon and Francs Wolff. And the Blue Note 7, an all-star band, is on the road celebrating the richness and vitality of the label’s great music.

Worcester’s April 1 concert that was the first stop in the East Coast final leg of the 50-city U.S. tour that winds up April 14 to 19 at Birdland in New York. And the setting was most appropriate given the venue and label’s shared qualities. 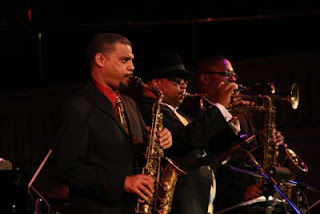 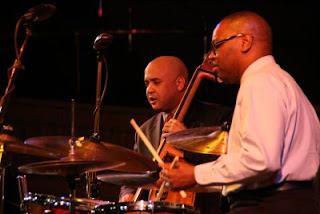 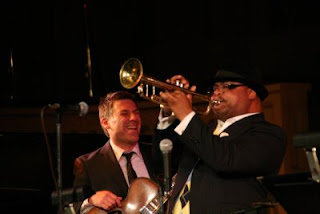 ” The ensemble playing was always tight and the format gave the musicians abundant solo space.
Peter Bernstein, Nicholas Payton... >
The players kept their own musical identities, but also tipped their hats to clear influences from the 1950s and ‘60s Blue Note heyday – with strains of Lee Morgan and Clifford Brown, Jackie McLean and Art Blakey. 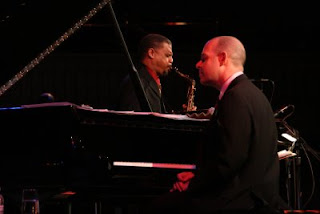 e players more space to mine new musical nuances from the classic Hancock hit. Cedar Walton wrote “Mosaic” for Blakey’s Jazz Messengers, and this version featured arranger Nash’s most extended and bombastic drum solo of the evening.
Steve Wilson, Bill Charlap... ^
After the Birdland engagement, the band members take a break for their other individual projects. A European tour begins in the fall.

Posted by Ken Franckling at 7:24 PM