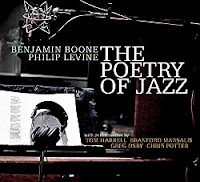 Benjamin Boone & Philip Levine, The Poetry of Jazz (Origin)
Jazz and poetry have had strong interconnections for many decades, including 1950s collaborations between bebop musicians and beat poets. More recently, there have been collaborations between former U.S. Poet Laureate Robert Pinsky and pianist Laurence Hobgood, as well as Amiri Baraka and saxophonist David Murray. The latest to emerge was last month’s release of The Poetry of Jazz, a collaboration between late Pulitzer Prize-winning poet Philip Levine and saxophonist/composer Benjamin Boone.

The recording was completed a year before Levine’s death in 2015. It features the former U.S. Poet Laureate reading 14 of his works to compositions and improvisations by Boone and his band. Most often, the musicians are adding appropriate accents, colors and responses to Levine’s vivid narration. Four of the works are jazz-inspired. They include poems written in homage to Sonny Rollins (“The Unknowable”), Clifford Brown (“I Remember Clifford”), John Coltrane (“Soloing”) and Charlie Parker (“Call It Music”), featuring Chris Potter, Tom Harrell, Branford Marsalis and Greg Osby respectively. The project was developed when Boone and Levine were fellow professors at Cal State-Fresno. This is a gem. 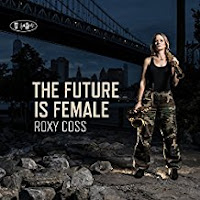 Roxy Coss, The Future is Female (Posi-Tone)
“The Future is Female” is not a tune on saxophonist and composer Roxy Coss’s new CD. It was the message on her sign at the Women’s March in January 2017. That initiative was the catalyst for the recording, which includes 10 originals musically exploring her perspective on the current state of feminism. Many of the titles, and the musical energy within those tunes, carry her own truths: including “Little Did She Know,” “She Needed a Hero, So That’s What She Became,” “Mr. President,” “#MeToo,” “Choices” and “Nasty Women Grab Back.” The latter was on her younger sister’s sign at the Women’s March. Favorite tracks: “Nevertheless , She Persisted,” “Females Are Strong as Hell” and “Feminist AF.” Coss’s band includes guitarist Alex Wintz, pianist Miki Yamanaka, bassist Rick Rosato and drummer Jimmy McBride.” The synergy and conversational quality of the interchanges between Coss and Wintz make this one soar. 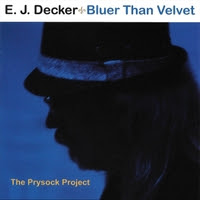 E. J. Decker, Bluer Than Velvet (Candela)
Singer E.J. Decker’s newest CD pays tribute to the late, great jazz storyteller Arthur Prysock. Bluer Than Velvet includes 11 hit tunes that Prysock recorded during his career from the mid-1940s through the 1970, including “”Blue Velvet,” ”A Ghost of a Chance,” “September in the Rain” and “Since I Fell For You.” Decker added three more tunes that Prysock never recorded, but have the same feel as the late baritone’s material. They are Cole Porter’s “Why Can’t You Behave,” the Gershwin Brothers’ “He Loves and She Loves,” and Lerner and Loewe’s “On The Street Where You Live.” With superb backing from baritone saxophonist Claire Daly, guitarist Chris Bergson, trombonist Elizabeth Frascola, pianist Les Kurtz, bassist Saadi Zain and drummer Tom Melito, New Yorker Decker has carved out his own space in today’s jazz vocal genre – while also underscoring Prysock’s important contributions. 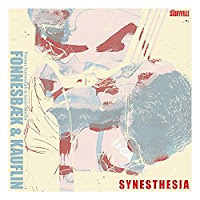 Jazz duo projects don’t get any better than this. Danish bassist Thomas Fonnesbæk and pianist Justin Kauflin recorded the session over two days in a Swedish studio. Some original material was composed in advance, while the two players developed others on the spot. Favorites include their explorations of Kauflin’s brooding “Lost,” Fonnesbæk’s mood-capturing “Panic Attack” and Oscar Peterson’s “Nigerian Marketplace.” The way they share the lead and support each other here is both exhilarating and beautiful. The title track “Synesthesia” is named after a neurological trait the two musicians have in common: seeing sounds as colors in their minds.

On Passion Reverence Transcendence, Venezuelan-born pianist Benito Gonzalez, drummer, mallets player and producer Gerry Gibbs and bassist Essiet Okon Essiet celebrate the music of piano giant McCoy Tyner, who came to prominence in the John Coltrane quartet. This is loaded with the rolling-thunder energy that is a hallmark of Tyner’s overall sound. They perform nine of McCoy’s compositions, including the hard-driving “Fly With the Wind” and the more genteel “You Taught My Heart to Sing,” while Gonzalez adds a solo piano version of Coltrane’s “Naima.” The trio contributes three originals with a Tyneresque flavor: Essiet’s “Tyner/Train Express,” Gibbs’ “Between Friends” and Gonzalez’ spirited “Brazilian Girls.” If you dig Tyner, you’ll savor this heart-felt homage. 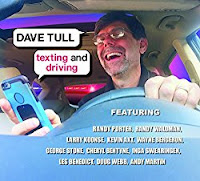 Drummer, singer and songwriter Dave Tull finds humor in ordinary things we often take for granted, or in social trends. With a zany twist of words, his good humor results in spirited jazz in the Dave Frishberg tradition. The title track is all about the over-dependence many of us have on our smartphones. Consider this lyric snippet: “I believe my seven followers on Instragram would like to see a photo of my every meal.” His rapid-fire delivery of social media bemusements is a clever way to underscore some of those absurdities.

Tull also tackles the subjects of dating, raising kids, and people who don’t get jazz but pretend they do (the latter on the hysterical “Clapping on One and Three”). There’s also a nifty duet with singer Cheryl Bentyne on “The Date.” He considers our daily lives from the viewpoint of a traffic signal that sees all on “The Stoplight at the End of the Street.” Top West Coast jazz musicians, including pianist Randy Porter, guitarist Larry Koonse, bassist Kevin Axt, trumpeters Wayne Bergeron and George Stone, and saxophonist Doug Webb, provide superb support here. The arrangements swing mightily.
Posted by Ken Franckling at 10:18 AM