Deck the halls with songs from jazzmen (and women) 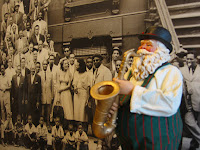 There is no shortage of holiday-inspired jazz material. Classics abound by the dozens, some long out of print. (Some of the double-entendre variety, most as covers of holiday fare with spirited soloing). And every year new ones arrive to add to the litany.


Here’s a sampling of this year’s presents to we listeners:

Halie Loren & Matt Treder, Many times, many ways: a holiday collection (Justin Time)
Canada’s Justin Time label has reissued Oregon-based Loren’s 2008 holiday recording, much to our delight. This is one of the finest in the genre this season, showcasing both Loren’s vocal artistry and the piano magic of her longtime accompanist. The duo setting works to their advantage on this material. A bonus: Treder’s instrumentals, “Sugar Cookies” and “From the Mouths of Babes.” Holiday twist: Loren’s take on the Ande Rasmussen tune “Blue Holiday.”


Various artists, Have Yourself a Merry Little Christmas (Justin Time)
Add this gift from Jim West’s Montreal-based Justin Time label to your bundle of the best holiday compilation CDs in many a year. Singers Hilary Kole and Diana Krall are each aboard for two tracks, and singer Coral Egan offers a sassy take on “You’re a Mean One Mr. Grinch.” Others stopping by with Christmas cheer (recorded between 1993 and 2011) include pianists Oliver Jones, Hank Jones, singers Ranee Lee and Johanne Blouin, Quartango and the Rob McConnell Tentet. Most unusual treat: the Montreal Jubilation Gospel Choir’s “Christmas Calypso Medley.”


Knoxville Jazz Orchestra, Christmas Time is Here (Knoxjazz)
This robust and swinging big band has been performing a Christmas concert annually since 2004, with founder, director and trumpeter Vance Thompson adding a few new arrangements each time out. When he got to nearly 20 of them, he realized it was time to record. And here is the splendid result. Featured soloists include tenor saxophonist Greg Tardy (who moved to Knoxville two years ago to become the University of Tennesee’s jazz saxophone professor), alto saxophonist Tim Green and Hammond B-3 ace Dan Trudell. Singer Jill Andrews joins the band on “O Little Town of Bethlehem” and the spiritual “Children Go Where I Send Thee” opens with a masterful choral introduction by one area choir and closes with another. There are lots of clever jazz twists and turns here.


Donna Singer, Kiss Me Beneath the Mistletoe (Emerald Baby)
Vocalist Donna Singer, who hails from the Catskills in upstate New York, teamed with bassist Doug Richards’ trio and a few guest artists on this fresh take on holiday standards and originals. Singer’s husband, Roy Singer, co-wrote four of the tracks (the title track and “On New Year’s Eve” with Mitchell Usher, and “In the Stillness of the Night” and “Born This First Christmas Night” with Elly Kouri). Guitarist Jeff Otis contributed the instrumental “Christmas is Near” and bassist Richards penned “Christmas in My Heart.” Singer is at her best on “Let It Snow.”

Will Scrugg’s Jazz Fellowship, Song of Simeon (self-produced)
The leader, an Atlanta-based saxophonist, brought together six other compatriots for this traditional outing. The CD represents a musical journey through the deeper themes of the biblical story of the birth of Christ. The 10 tunes include the title track, five of the better-known religious-themed songs about the Nativity, plus others - such as "Lo, How a Rose E'er Blooming" and "T'was in the Moon of Wintertime (The Huron Carol)."


Elsewhere on the holiday jazz front...
Singers Jane Monheit and Sara Gazarek teamed up to record a new single "Come Spend Christmas With Me" on Palmetto Records. Larry Goldings co-wrote the tune with lyricist Cliff Goldmacher and plays piano on the track. The digital-only release is available on iTunes and Amazon, with all proceeds being donated to the ASPCA, in support of animal rights.

Norah Jones’ rendition of “It Came Upon a Midnight Clear” is available at the iTunes Music Store, and for a time was featured as the free Holiday Single of the Week.