I’ve submitted my take on this year’s Tanglewood Jazz Festival to JazzTimes. I’ll advise here when it is published. In the meantime, suffice it to say that overall it was another interesting and exceptional festival with only a couple of disappointments. Fortunately, the great musical moments more than compensated for them.
Paquito d’Rivera opened the weekend on the highest note, and the bar he set may have been matched here and there, but was not exceeded. He truly understood – and responded to the festival’s move to blend jazz and classical influences in more of its programming.
Paquito d’Rivera... >
John Pizzarelli and his wife, singer Jessica Molaskey, taped their program “Radio Deluxe” at Tanglewood, much like Marian McPartland taped “Piano Jazz” here in the Berkshires for the past seven years. 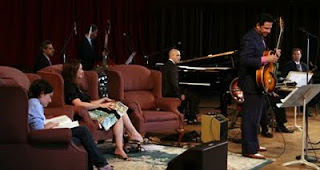 Daughter Madeleine catches up on "Harry Potter" during the Pizzarellis' taping of "Radio Deluxe"...
The Saturday night “Dreaming The Duke” concert had some nightmarish qualities, that were more related to arrangements and music choices. The singers and most musicians were not the flaw here. It felt like an early stage of a work in progress.
Kenny Barron, Mulgrew Miller...
Kenny Barron and Mulgrew Miller provided an afternoon of dual piano interplay that was exquisite in all respects.
Jon Faddis’s “Majesty of the Trumpet” set with Sean Jones and Wallace Roney, and Dave Holland’s octet were strong closers.
Wallace Roney, Jon Faddis, Sean Jones...
Young singer Kat Edmonson was a highlight at the Jazz Café, a tented pre-concert venue just up the hill from Ozawa Hall. This singer from Austin, Texas takes jazz chestnuts and even more recent pop songs and embraces them in a way that they sound like originals. Keep an eye on her – and both ears, too.
Kat Edmonson... >
Posted by Ken Franckling at 6:51 PM