Back on the road, with love

When Japanese pianist Makoto Ozone last visited New York City, a not-so-funny thing happened. He was in the Big Apple in January 2020, planning to visit friends in advance of his next scheduled trip, an April 2020 appearance with his trio at Dizzy's Club.

“I was supposed to be there only for a few days, but I got COVID as soon as I got there. So I had to lock myself up for about 12 days. I had to cancel a gig in Germany because I couldn’t fly out,” Ozone emailed me. He couldn't return that April because his Dizzy's Club gig, and virtually all others in the jazz world, vanished thanks to the pandemic.

Shortly after his 2020 touring plans bit the dust, he started live-streaming solo piano concerts from his Tokyo home. He played every night for 53 consecutive nights. That initiative, “Welcome to Our Living Room,” drew more than thousands of viewers nightly. They included many musician friends and collaborators.

“My wife (Misuzu Kanno), an excellent actor, and I saw this lock-down situation as our chance to thank all of our fans back from all these years for their love and support. But you know what? The hundreds and thousands of comments we received from people gave us so much happiness and power to live on. We wanted to give them our love but we got more back from them.

“We had over 5,000 viewers every night from all over the world, including my dearest musician friends like Bob James, Branford Marsalis, Joey Calderazzo, Jeff 'Tain' Watts, Chick Corea, Peter Erskine, Tommy Smith. Wynton Marsalis called me on my cell during my performance and I stopped playing to answer. I said to the audience, 'Excuse me, I have to take this one!'

“This incredible communication reminded me about the real essence of music, which I first felt when I started to play and perform in front of people: how exciting and fun it was. It is a very simple thing, I play and they enjoy. It totally brought my mind back to that initial humbleness.” 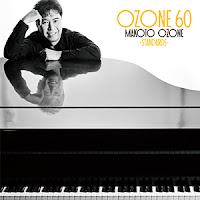 That feeling was also the inspiration for his newly released jazz recording OZONE 60 – Standards (Universal), which was recorded shortly before his 60th birthday. It supplements a two-disc OZONE 60 project that includes both classical and jazz material.

When Ozone returns next week for a two-stop North American mini-tour, it will be his first performance here since before the start of the pandemic.

He'll play Dizzy's Club in Manhattan with his trio (including bassist Yashushi Nakamura and drummer Clarence Penn) on April 20, then they will head north to Toronto for an April 23 performance at Koerner Hall as part of the Oscar Peterson International Jazz Festival. The Toronto concert is most fitting because the late piano giant was Ozone's first jazz hero.

Makoto and I emailed back and forth last month as I was preparing a brief preview of his Dizzy's Club gig for the April issue of Hot House. (see below)

Inspired by Oscar Peterson’s formidable sound, Ozone shifted from organ to piano as his instrument of choice at age 12. That was back in 1973 in his native Kobe, Japan. After graduating from Berklee College of Music in Boston and working in vibes player Gary Burton’s band for six years, he carved out his own international career. He’s been a revered educator, performer and bandleader since returning to Japan in 1989. His dynamic playing is marked by deeply intense swing, whether the mood of the moment be breezy or power-driven.

After the Toronto concert on April 23, he jets to Germany to premiere his full-orchestra arrangement of Mozart's “Piano Concerto No.9 in Eb major” (a.k.a. “Juenehomme”) with the Stuttgart Philharmonie. Then he heads to Hungary for a duet concert in Budapest with vibraphonist Richard Szaniszlo that was planned for 2020, then canceled.

“I am so grateful that I can still play music and share this happiness with the audience,” Ozone says.

Trombonist Herb Bruce and his Herbicide Jazz Band closed the Charlotte County Jazz Society's 2021-22 concert season on Monday, April 11 in Punta Gorda FL with a wide-ranging trip into the world of classic jazz. It featured a stage full of all-star players, accompanied between songs by the leader's self-deprecating humor.

This was Herbicide's third visit to the CCJS concert stage. There was a bit of repetition of favorites from the 2015 and 2018 sets, but the evening was mixed with fresh material, principally from 1920s and '30s Dixieland and New Orleans repertoires. All of it was delivered well by the sextet.

No matter whether he is playing classic jazz, swing jazz or bebop, Bruce is a master of the trombone – in technique, expressiveness and the musical passion that burst from his horn.

Dean joined the fun for two 1930s jazz/pop classics: “I'm Gonna Sit Right Down (And Write Myself A Letter)” and the Kansas Joe McCoy blues “Why Don't You Do Right?” Peggy Lee recorded the latter tune with the Benny Goodman Orchestra in 1942. This most popular of Lee's records with Goodman was the springboard for her solo career – and it was right in Dean's expressive wheelhouse. Gillespie switched to tenor sax for each of Dean's songs, adding much to the mood.
The strongest moments included the band's lengthy take on “Granada,” written in 1932 by Mexican composer Agustín Lara, with Sandke's clarion trumpet highlighting the extended, intricate arrangement that closed the first set. Bruce was in the musical spotlight after intermission on “Wabash Blues,” which was first recorded in 1921 by the Isham Jones Orchestra. His sound was growling at times, plunger muted at others.

Sandke was featured on the “Theme from Pete Kelly's Blues,” which was a natural choice. Actor Jack Webb played trumpeter/bandleader Pete Kelly in the 1955 film. The band dug deep into a hit of Fats Waller (“Yacht Club Swing”) and the Hoagy Carmichael ballad “New Orleans” before Dean returned to share two Duke Ellington songbook early classics “Do Nothing Till You Hear from Me" and “Three Little Words.” The latter popular song was recorded in 1930 by The Rhythm Boys (including Bing Crosby), accompanied by the Ellington orchestra.

Then it was back to New Orleans for the last segment, with the band sharing “Basin Street Blues” and its traditional closer, “Farewell Blues” from one of Bruce's favorite Dixieland sextets. The Basin Street Six, formed in 1950 with young clarinetist Pete Fountain, as one of its founders, is the band that inspired him to form Herbicide.

Herbicide also has a vibrant Nashville connection. It is home base for arranger Terry Waddell, a drummer and big band leader who wrote most of the band's charts.

The Herbicide concert drew a full house of about 275 to the Gulf Theater at the Military History Museum. Bruce's zany barbs back and forth with his band mates - and the audience - enhanced a joyous moment. CCJS completed a full concert cycle, on the heels of the pandemic-related cancellation of its final April 2020 concert and the entire 2020-21 season.

Smiles and laughter were in order.

The sheer joy of swinging jazz

You can hear it in the music, and you can see it in the faces.

Jazz at its best touches the audience, and is celebrated deeply in the musical communion among its makers. No matter the age gap, or the almost immeasurable decades of experience by most participants.

Such was the case on Sunday, April 10 when the Dan Miller-Lew Del Gatto quintet performed at Naples United Church of Christ. The quintet featured 16-year-old Miami-area pianist Brandon Goldberg - and for this 90-minute performance, he clearly was the center of attention in a band that was made up of jazz heavyweights.

Whenever Goldberg soloed, it was fascinating to watch the faces of his on-stage jazz elders. Smiles of appreciation and rapt attention abounded. Like the audience, they too were digging the continued progress he has made as a young musician since they'd last worked with him a couple of years ago. He now has two four-stars recordings to his name, Let's Play! and In Good Time. The latter session, released last September, featured drumming great Ralph Peterson Jr., who died of cancer in March 2021, just four months after it was recorded.

Miller first heard Goldberg in Miami five years ago when he was guest director for the Miami-Dade All-County Honors High School Jazz Band. Brandon was the piano player for the group, even though he was a 10-year-old middle school student.

Then as now, he was passionate about jazz, and has developed into what Miller describes as a "incredibly swinging and inventive player."

That was apparent throughout the band's set. It included Thelonious Monk's "Straight, No Chaser," Jerome Kern's "Look for the Silver Lining," Duke Ellington's "In a Mellow Tone," the Johnny Mandel ballad "Emily," Peter Nero's "Sunday in New York," George Gershwin's "They Can't Take That Away From Me" and the Count Basie band chestnut "Topsy" before going full circle to Monk for the finale, a romp through "Bright Mississippi," which he based on the chord changes to "Sweet Georgia Brown."

Goldberg performed with just bass and drums accompaniment on "Emily," which came from the soundtrack to "The Americanization of Emily." On this cusp-of-evening, the young pianist explored and added his own impressions to its lush melody. He went solo a couple of tunes later with his playful, extended take on the Gershwin standard.

The way the band swung through these extended eight tunes, the music flew by. It was so riveting, it didn't feel like we'd been listening for 90 minutes.

Posted by Ken Franckling at 10:16 PM No comments: