My take on the best jazz recordings of 2021

‘Tis the season for the outpouring of Top 10 lists, and their many variations, for jazz, world events, etc. The jazz lists tend to have a lot of variation depending on the each reviewer's personal tastes, as well as what he or she listened to during the year.* Bottom line, all are extremely subjective. 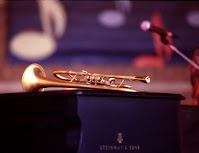 These choices below (aside from top 10 new songs of the year) were submitted to the Jazz Journalists Association and JazzCritics Poll 2021. The latter is the 16th annual Francis Davis and Tom Hull-produced poll that is being published this year by the Boston-based online arts journal The Arts Fuse. It previously was published by The Village Voice, Rhapsody.com and NPR Music).
Read more »
Posted by Ken Franckling at 10:00 AM No comments:

Oakland CA-based singer Kenny Washington is a marvel, plain and simple. And his return performance to Artis Naples' All That Jazz series on Wednesday, December 13 showcased  the diminutive singer's skills,tone and wide range, and his artful scatting on two of the evening's 10 tunes.Washington was special guest with the Naples Philharmonic Jazz Orchestra, which on this evening was stretched from its usual sextet to a septet. The  mega-talented band this night included tenor saxophonist and artistic director Lew Del Gatto, trumpeter Dan Miller, trombonist Dante Luciani, guitarist John Hart, pianist Jerry Stawski, bassist Kevin Mauldin and drummer Mike Harvey.

The program did not include a single repeat of material from the singer's first appearance in the series in November 2015.

Read more »
Posted by Ken Franckling at 12:03 PM No comments:

One of the great joys in hearing live jazz is a night when talented players who've never performed together get on stage and find instant chemistry that makes it sound like they've been a working group for years.

That was the case on Monday, December 13, when hard-bopping saxophonist Greg Abate returned for his sixth Charlotte County Jazz Society performance since 2008. And what a magical night it was, with a new band, a new venue and an enthusiastic audience. Abate was at the top of his game.

The band included Abate, pianist John O'Leary, bassist Doug Mathews and drummer Clyde Connor. Rhode Island-based Abate and Tampa-based O'Leary had never worked with any of the other players on stage. Gainesville-based Connor and Orlando-based Mathews had worked together only a couple of times.

Abate is one of the few modern ambassadors of hard-bop, an intense style of playing that grew out of bebop in the 1950s, following in the musical footsteps of alto saxophonists Phil Woods and Richie Cole. He performed and recorded with both of them over the years.

The leader dedicated this concert to longtime CCJS concert programmer and board member Mike Parmelee, who died last spring. The first set included a new composition, "Blues For Mike."

Read more »
Posted by Ken Franckling at 12:45 PM No comments:

Jazz in the name of love - and loving it

With co-leader Dan Miller out of town, tenor saxophonist Lew Del Gatto brought in guitarist Frank Portolese to join the fun for the weekly quartet gig at The Barrel Room in downtown Fort Myers on Thursday, December 9.

Trumpeter Miller was busy with jazz faculty duties at the University of Central Florida in Orlando. So the band this night included Saturday Night Live Band alumnus Del Gatto, Portolese, bassist Brandon Robertson and drummer Tony Vigilante.The highlight of the first set was a Del Gatto-selected string of five tunes that explored many facets of love. "Alone Together" was followed by "I Love You" played in the key of F, which Del Gatto called "the key of love." Then came "Makin' Whoopie," and two relationship-is-over choices, "Gone With the Wind" and "You Don't Know What Love Is."

Lou could have gone on and on with the seemingly endless choices, but didn't. This wasn't a medley of brief snippets. Each tune got an extended instrumental exploration that showcased the players' strong chops, soloing skills, and cohesiveness as a band. Chicago native Portolese fit well in the band, displaying a musical sensitivity that underscored his blistering bebop lines.

There is so much to admire at an Acme Jazz Garage concert. The Tampa-based band leaps with enthusiasm into a wide-ranging bag of influences to deliver music that is distinctly its own.

Bop, bossa nova, R&B, a bit of Cuban rumba, some soul jazz and a few jazz standards - filtered with Acme's high-energy jam-band enthusiasm - made for a powerful afternoon.

Acme Jazz Garage has been on the scene for 10 years. The personnel for this concert included bassist Philip Booth, guitarist Matt Swenson, pianist Jody Marsh (who succeeded founding keyboardist Bryan Lewis after the latter's move back to upstate New York this year), saxophonist Rick Runion and drummer Jean Bolduc. Percussionist-singer Marshall Gillon was a special guest. All of the players have worked with each other in various combinations and bands for many years. That familiarity enhances their group chemistry.

The band is cohesive and their arrangements and soloing are adventurous, anchored with a solid jazz feeling. If you like Steely Dan, you'll like Acme Jazz Garage.

Read more »
Posted by Ken Franckling at 3:10 PM No comments: