James Moody, Moody 4A (IPO Recordings)
At 84 he might be entitled to coast a bit musically, but James Moody never does. This gem was recorded o 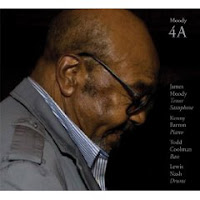 n the first of two days of recordings with a sublime quartet that teamed the saxophonist with pianist Kenny Barron, bassist Todd Coolman and drummer Lewis Nash. Day two's results will be released at a later date as Moody 4B. There is much here to enjoy. My clear favorite: his stunning duet wit Barron on “East of the Sun.” The quartet’s version of Benny Golson’s “Stablemates” captures Moody at his uptempo best. This tasty project swings. Oh, does it ever.

The Michael Thomas Quintet, Live at Twins Jazz, Vol. 1 and Vol. 2 (JazHead Entertainment)
Hard bop lives. You’ll find disciples in geographically diverse pockets across the United States and around the world, including me 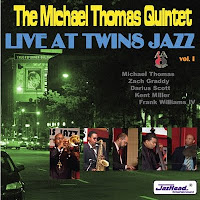 tropolitan Washington, D.C., which trumpeter Michael Thomas and his long-standing band call home. Thomas released these two separate CDs simultaneously, not as a two-CD package. Together, they capture his band in full force on two consecutive nights at Twins Jazz, a club in the nation’s capital. Volume 2 includes a special guest, tenor saxophonist Andrew White. There is only one 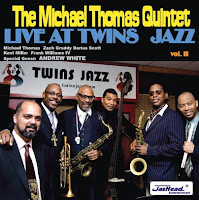 duplicate tune on the two discs, dramatically different version of Thomas’s heated “Mike’s Blues.” Volume 1 also features two staples from his repertoire: his original “Blues #9” and his take on the pop tune ”Candy,” which Lee Morgan transformed into a classic bebop cover, as well as Thomas’s poignant version of Benny Golson’s classic “I Remember Clifford.” Volume Two’s highlights include a toe-to-toe tenor battle between White and Zach Graddy on “Mike’s Blues” and White’s solo on Thomas’s “The Little Individual.” Live is the way to go when you want to absorb hard bop energy. A live recording is just right for a band that burns, and swings mightily, in the solid Jazz Messengers tradition.

Mike Mainieri/Marnix Busstra Quartet, Twelve Pieces (NYC Records)
Marnix Busstra, a guitarist from The Netherlands, was the catalyst for this project, which teams vibes player Mike Mainieri with 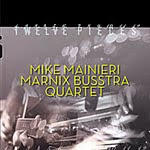 Busstra’s band, fleshed out by bassist Eric van der Westen and drummer Pieter Bast. It is a stunning session in which the vibes and guitar blend and offset each other to create a wonderful sonic energy. It swings, and the melody rules on 10 Busstra compositions, one track (“All in a Row”) from Mainieri and “Kannada,” an adaptation of an Indian children’s song. Busstra also brings an electronic sitar into the mix on to add an exotic touch to “Lost in Little Spain” and “Kannada.” There is much here to savor. Favorites: “Lost in Little Spain,” “Don’t Break Step” and “Old Fashion.”
Posted by Ken Franckling at 12:49 PM