Going into 2009, we wondered whether the Newport Jazz Festival as we’ve known it all these years, would ever be back - given the financial straits of the Festival Network LLC, the upstart company that in 2007 bought George Wein’s highly respected, well-oiled Festival Productions Inc. machine.

Well, it’s back, compliments of Wein’s refusal to see his Newport legacy muddied, calling together many members of his longtime production team - from Newport to New Orleans and elsewhere, reforming a new company - New Festival Productions, and having a new corporate sponsor sign on for both Newport and, starting in 2010, in New York.

So “George Wein’s CareFusion Jazz Festival 55 “ opens tomorrow night at historic Newport Casino (home of The International Tennis Hall of Fame), which was the site of the very first Newport Jazz Festival back in July 1954. The Anat Cohen-Howard Alden Quartet opens for singer Chaka Khan and the George Duke Trio.

The swirl of activity shifts Saturday and Sunday to Fort Adams State Park overlooking picturesque Newport harbor, where the music on three stages will be diverse and plentiful. Mainstream, bop, Latin jazz, and the avant-garde all are represented.

(Aside: Wein has also begun exploring ways to create a nonprofit foundation that can ensure the jazz and folk festivals continue in Newport in perpetuity, and is taking steps to bus inner-city youths from Providence RI and Bridgeport CT to the festival this weekend to expose them to jazz.) 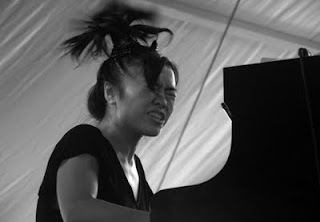 With the scope of music and sometimes painful choices between groups to hear simultaneously or with a little overlap, you have to pick your spots. Any way you go, it is a win.