Folk with a touch of jazz

Jazz festival fans can rejoice with something tangible in Newport. The 50th anniversary edition of the folk festival – George Wein’s Folk Festival 50 – opened without a hitch today, under brilliant sunshine. It means Wein’s revived jazz festival is less than a week away.

You’ve doubtless read elsewhere, or in postings below, of the financial saga that forced Wein to regain control of festival-producing in Newport and begin work on yet another phase of production in the city where the festival tradition began (jazz in 1954, folk in 1959). 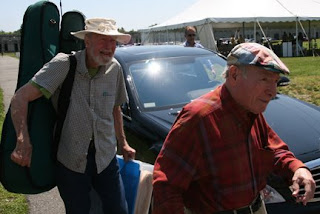 George Wein and Pete Seeger arrive at Fort Adams State Park… >
A crowd of 9,200 turned out for day one, the largest for a folk event in Newport since Bob Dylan returned in 2002. The lineup was a careful blend of veterans, like Seeger and Ramblin’ Jack Elliott and Mavis Staples, and younger and emerging talent. The crowd was a blend of festival veteran attendees and what seemed a majority of much younger fans.

There was even a touch of jazz. When folk festival stalwa 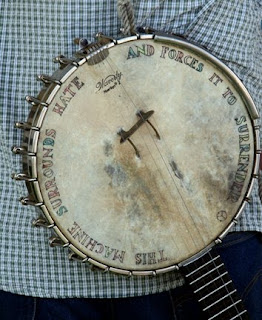 rt Pete Seeger, now 90, closed out the day with a traditional main-stage sing-along featuring about 30 festival artists, they were joined by Ben Jaffe the Preservation Hall Jazz Band leader and bassist, on tuba.

Seeger's message lives on his banjo… >

UPDATE: Jaffe also sat in Sunday with Del McCoury's bluegrass band and joined the evening sing-along finale with Seeger, Joan Baez, Judy Collins, McCoury and many, many others.