On September 20, jazz great Dave Brubeck will have something in common with Bonnie Raitt, Sting, Loretta Lynn and Gloria and Emilio Estefan - an Honorary Doctorate of Music from Berklee for their contributions to music and humanity. 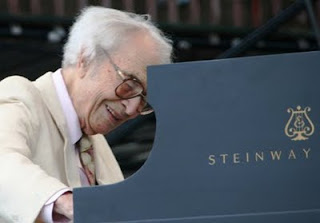 e just before his performance that evening at the 52nd annual Monterey Jazz Festival.

“It feels fitting to make this presentation to Dave for his many contributions to jazz, orchestral and sacred music, and to education, with the Brubeck Institute at the University of the Pacific, and at the Monterey Jazz Festival, where he has so many strong connections and associations,” said Berklee President Roger Brown. “The 50-year anniversary of the release of Time Out also seems like a perfect moment to thank Dave for all he’s done for the world, and the world of music.”

Berklee began bestowing its Honorary Doctorate of Music, for contributions to music and humanity, in 1971. Duke Ellington was the first recipient. Other jazz recipients have included Dizzy Gillespie, Nancy Wilson, Tito Puente, Toshiko Akiyoshi, Chick Corea, Quincy Jones, and Elvin and Hank Jones. Actor and producer Clint Eastwood is scheduled to take part in honoring Brubeck. In 2007, Eastwood received a Berklee honorary doctor of music at Monterey, for his efforts to popularize jazz through his films and film music.
Posted by Ken Franckling at 8:22 AM