Two and a half days into my Montreal International Jazz Festival stay, or even minutes into it for that matter, one thing is apparent. This is a jazz festival that never gets tired – and keeps evolving and improving year after year after year.

This 31st edition, which began June 25 and runs through July 6, is an artful swirl of more than 800 concerts, daily Mardi Gras-like parades, mimes and other street performers, dancers – and seemingly a talented street band of some type – from zany to semi-serious, every time you turn a corner. 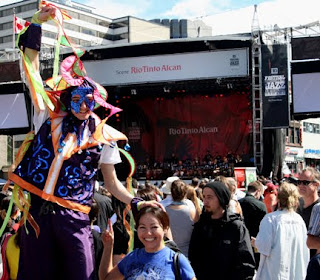 Montreal trumpeter Ron DiLauro’s stunning revisitation of the classic Miles Davis-Gil Evans jazz orchestral version of Porgy and Bess. Davis and Evans set a very high standard with this work, then matched it with the more worldly Sketches of Spain project. Hearing DiLauro’s big band put its own careful stamp on this timeless music was wonderful. It also was a reminder that it is futile for number of aspiring singers to think they can improve on this orchestral treatment of “Summertime.” The results are cheesy more often than not.

Trumpeter Terence Blanchard’s quintet of superbly skilled musicians who are pushing the envelope forward, with much talent, yet perhaps less grounding in 4/4 swing than some listeners would like. Kidding that tenor saxophonist Brice Winston hails from the birthplace of jazz (Tucson, Arizona), Blanchard turned his humor into a political jab at Arizona’s immigration law controversy. “If you’re of Latin descent, you have to leave the show now,” Blanchard said. “A country of immigrants talking about immigration. That’s some of the funniest shit I’ve heard in my life.”

The festival will take on an even stringer New Orleans flair in its final four nights, with concerts by John Scofield and the Piety Street Band, Allen Toussaint solo and with his Bright Mississippi Project, and a closing night Mardi Gras parade and extravaganza featuring Toussaint with Trombone Shorty, the Soul Rebels Brass Band and Zachary Richard.

With more music from a variety of genres than a single pair of ears can absorb, but abundant choices for the Montrealers who flock here by the millions, there’s no doubt why many consider this the best jazz festival on the planet.

Also not to be missed: the fascinating "We Want Miles" exhibit that we checked out today at The Montreal Museum of Fine Arts, which is just two Metro stops away from the Place des Arts. It is a fascinating reminder of the breadth and depth of Davis's amazing musical journey. One could spend hours - or days - plumbing it detail - interviews, correspondence relating to his career, music, art, fashion and interviews. It runs through August 29.

Posted by Ken Franckling at 4:21 PM