A special award among many (updated)

This afternoon preceding his 14th Montreal International Jazz Festival concert appearance, pianist Dave Brubeck was honored with a special issue of the festival’s Miles Davis Award, which honors a jazz musician of international stature for a lifetime body of great work. 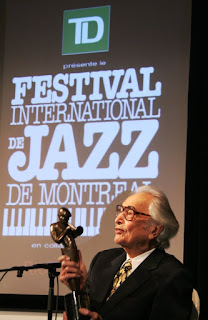 Brubeck, who turns 90 in December, received the weighty bronze statuette from festival president and co-founder Alain Simard. “It’s heavy.... So was Miles,” Brubeck quipped before delving into a few anecdotes about Davis, whom he considered a great friend. “We exchanged ideas back and forth and had a great relationship,” Brubeck said. He recalled one afternoon when Davis came to visit his Connecticut home. He and his sons had been playing basketball in the driveway, and soon, the sons were amazed to see their dad shooting hoops with Miles Davis.

In taking note of his stellar career, the festival noted that before Brubeck, jazz was essentially an East Coast affair.

Each year, the festival bestows a half-dozen or so significant honors for musicianship or other contributions to music, in addition to its Grand Prix de Jazz TD that is awarded to a rising star of Canadian jazz from among eight competitors on the outdoor stages at this year’s festival.

This year’s other major honorees included:

Tenor saxophonist Sonny Rollins received the 17th Miles Davis Award (the regular award, given a week prior to Brubeck’s special award) for his body or work and influence on the jazz idiom.

Photographer Herman Leonard received the festival’s second Bruce Lundvall Award, which is presented to a non-musician leaving his or her mark on the world of jazz.

Bassist (as well as pianist, percussionist and vibes player) Don Thompson received the Oscar Peterson Award, which is presented to a Canadian musician who has made outstanding contributions to jazz.

Bassist and singer Richard Bona was honored with the Antonio Carlos Jobim Award for distinguished work in the world music field and cultural crossover to jazz.

The Manhattan Transfer received the Ella Fitzgerald Award for its distinguished and world-renowned work in the vocal field. The group has been together for 37 years.

The festival winds down tomorrow night (Tuesday) with a Mardi Gras-type spectacle, complete with an hour-long carnival-like parade before Allen Toussaint and oter New Orleans musicicans hit the stage for a closing extravaganza,
Posted by Ken Franckling at 6:26 PM