Every time Dave Brubeck plays the Newport Jazz Festival, he breaks his own record.
The pianist, who will turn 90 this December 6, has performed at Newp 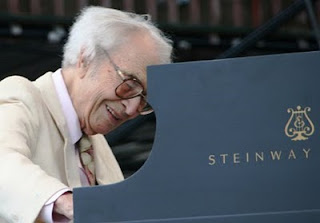 ort more than any other jazz artist in the festival's storied, sometimes roller coaster history. He was there for the first festival in 1954 - and has been back more than 30 times since.
Last year, Brubeck's quartet played at Newport - and a later in the day he added a footnote to the Newport history book by joining Tony Bennett on stage for a rousing version of "That Old Black Magic" to end the weekend.
At this year's CareFusion Newport Jazz Festival, Brubeck will be back - without his own band - to join Wynton Marsalis on Sunday August 8 as a special guest with the trumpeter's quintet. It's also a natural progression from the 2005 festival. Marsalis sat in with Brubeck's band after playing appeared earlier in the day with his own quintet.
Producer George Wein loves it when his old friend is in town. Their friendship dates to the early 1950s - when Wein booked and promoted Brubeck's then-emerging quartet on a New England concert tour.
“The atmosphere of love that Dave Brubeck generates completely fills the beautiful harbor, and like last year’s festival surprise when Dave played a tune with Tony Bennett, a memorable piece of musical history will be made,” Wein said.
This year's festival runs August 6 to 8, with a Friday night opener at the historic Newport Casino and International Tennis Hall of Fame) featuring pianist-singer Jamie Cullum and saxophonist Grace Kelly. The action moves to Fort Adams State Park the following two days with an ambitious and wide-ranging schedule on three stages.
Posted by Ken Franckling at 10:59 AM