Timing has an impact on just about everything we do, including the attention given to various jazz releases. Bill Cunliffe’s Blues and the Abstract Truth: Take 2

released late in 2008 on the Resonance label is a case in point.
The CD is a masterful work - updating Oliver Nelson’s classic 1961 all-star project with great reverence while 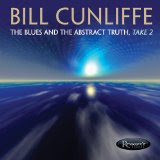 skillfully adding new twists and turns. Cunliffe and his nine-piece band perform updated arrangements of all six tunes from Nelson’s septet project, in exact order. Then he tacked on two originals, a forward-looking bop exploration called “Port Authority” and a Nelson-like homage to Cunliffe’s own piano mentor, Mary Lou Williams, called “May Lou’s Blues. This disc belongs on many a CD shelf, right next to Nelson’s original.
Now, about that timing. The CD was released on October 14, 2008, late in the year for consideration by critics assembling their Top 10 lists for 2008. I can’t begin to guess even how many received it or had a chance to give it a listen prior to submitting their various ballots or publishing their own year-end lists.
More than 75 of us contributed to Francis Davis’s very important 2008 jazz poll published last December 30 in the Village Voice. I double-checked yesterday. Cunliffe’s CD didn’t appear on a single list. My list for that poll, the Jazz Journalists Association’s Web site and allaboutjazz.com didn’t contain it, unfortunately, because I never received the disc. I listened to a friend’s copy this past week. Suffice it to say that I was blown away by this exceptional revisit/reinterpretation of the original project made nearly a half-century ago.
So even though it technically came out late in 2008, I am tempted to put it in my 2009 Top 10 list. And why not? It can balance things a bit - as several critics put drummer Mike Clark’s excellent Blueprints Of Jazz Vol. 1 (Talking House) on their 2008 lists… even though it wasn’t released until February 3, 2009 (see My January 25 blog entry).
Posted by Ken Franckling at 12:38 PM