(Motéma) After a series of 10 highly regarded trio recordings over the past 15 years, pianist Lynne Arriale has changed things up. On this recording, made at Bennett Studios in northern New Jersey, she expanded her 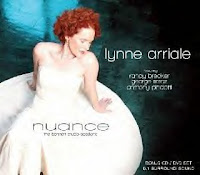 band to quartet – featuring trumpeter Randy Brecker. She had worked a few times previously with drummer Anthony Pinciotti, but this was her first collaboration with Brecker and bassist George Mraz.

The Nuance session reveals more beautiful facets of Arriale’s musical vision and crystalline sound. Most interesting is the way she and Brecker share and trade both melodic and harmonic lead roles. There is a beautiful version of Sting’s “Wrapped Around Your Finger.” This CD has much to offer both in the band’s reworkings of standards and performances of six Arriale originals.

My personal favorites are the poignant “Ballad of the Sad Young Men” and a rousing version of Dizzy Gillespie’s “A Night in Tunisia,” and Arriale’s beautiful, elegiac “A Gentle Soul” and her spirited “Crawfish & Gumbo.” As a bonus, the package includes a DVD with different versions of the tunes, performed at Bennett Studios in front of an audience. 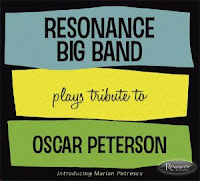 keyboard artist who deserves watching in other projects going forward - no matter that he’s a thirty-something Romanian living in Finland.

This project took several of Peterson’s best-known compositions and other material that he made his own - and use new arrangements of those songs to celebrate Peterson’s passion, swing and technique. Marian Petrescu is no Peterson copycat. He blends in his own improvisations throughout the material. My favorites include the “Bossa Beguine,” “Little Girl Blue” (Rodgers and Hart) and “Sally’s Tomato,” a Henry Mancini piece using the original Claus Ogerman arrangement that Peterson used on his version on the 1969 big band recording Motions and Emotions on Germany’s MPS label. The other arrangements were done by Kuno Schmidt and Bill Cunliffe, who assembled this big band from among L.A.’s finest jazz and studio players. The CD ends with Petrescu’s nimble solo piano take on Peterson’s difficult, intimate burner “A Little Jazz Exercise.” An accompanying DVD explores the conception and production of this worthy project.

What a forceful project in which to introduce many more people to Marian Petrescu, a serious Oscar Peterson disciple and forceful/formidable pianist in his own right.

Note: there are two titles floating around the Intranet for this CD, the other being The Resonance Big Band plays the legacy of Oscar Peterson, which is how it can be ordered through Amazon.com. However I’ve been told by Resonance consultant Ricky Schultz that plays tribute to is the correct name.

(Posi-Tone)
Fans of Peter Bernstein and Howard Alden are likely to love this one, from a player of the next generation in the mainstream swing 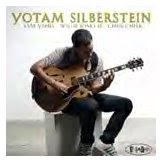 style, enhanced by his modern sense of harmonics and personal sense of phrasing. Yotam Silberstein grew up in Israel and his playing sometimes is colored by his Middle Eastern roots. The New School graduate and Thelonious Monk guitar competition semifinalist (2005) is joined on this session by Sam Yahel on organ, and Willie Jones III on drum, with Chris Cheek on tenor sax on five of the 10 tracks. So it is half organ-guitar trio and half a quartet project.

An array of originals are complemented by fresh takes on two standards, “Foolin’ Myself” and “If Ever I Would Leave You,” as well as “Ani Eshtagea,” a Venezuelan folk song performed by many Israeli singers. The latter tune and Silberstein’s energetic “Borsht” and reflective “Cancao “are standouts. This is a player fast on the rise. I heard him in April with Sylvia Cuenca’s band, and he deserves a close listen, whether with his own band or working with others.
Posted by Ken Franckling at 6:45 PM