Sean Jones, The Search Within

(Mack Avenue)
Trumpeter Sean Jones has wowed listeners with his chops ever since his recording debut five years ago with Eternal Journey. The chops are still amazing on The Search Within, but this project, his fifth re

cording as a leader, is more a celebration of what’s in his heart. The reflective aspects of the writing and performance in no way diminish the stylistic range of tunes explored by Jones & Co. In fact, they enhance it.

“The Search Within (for less),” the middle segment or interlude of his three-part title tune, is a beauty, as is his Khalil Gibran-inspired ballad “The Ambitious Violet.” The special guests featured with his regular sextet (pianist Orrin Evans, saxophonists Brian Hogans and Walter Smith, bassist Luques Curtis and drummer Obed Calvaire) include Gregoire Maret on harmonica, Erika Von Kleist on flute, Kahlil Bell on percussion and singer Carolyn Perteete, who also wrote the lyrics to Jones’s “Letter of Resignation.”

(CCC Music Group)
One of the great treats at April's 31st Cape May Jazz Festival at the tip of the Jersey Shore was a chance to hear emerging talent Barbara King live. In person, her music is as strong and intriguing as on this 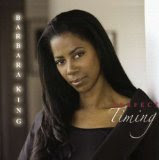 debut CD. The Brooklyn NY native has an ear for great tunes that have been under-performed in jazz circles, a thirst for fresh arrangements (developed for this project by keyboard player Dorsey “Rob” Robinson) and a great voice (reminiscent of Sarah Vaughn at times) to make it all work.

The treats here include fresh takes on the Dionne Warwick-associated Bacharach-David tune “I Say A Little Prayer,” Stevie Wonder’s “Ribbon in the Sky,” the Donny Hathaway-penned Roberta Flack hit “Tryin’ Times” and the Beatles hit “Let It Be.” Her version of “Forever Young” enables us to savor the lyrics – something that would be a challenge on the original for all but the most die-hard Bob Dylan fans. King grew up musically in her church choirs. Her originals “Miracles,” “Perfect Timing” and “Your Smile” are both beautiful and carry great messages, as does J.C. White’s “One More Day.”

(PBGL)
The Hammond B-3 organ has a narrow but notable history in recordings w ith big bands. Jimmy Smith’s collaborations with Count Basie and Oliver Nelson come to mind, as does Jimmy Griff’s Couint Ba sie tribute project with a unit that evolved into the Thad Jones-Mel Lewis Orchestra. West Coast keyboard player/ composer /arranger/producer Dave Siebels wonderfully adds to that tradition in this project with pianist Goodwin’s Grammy-winning Big Phat Band. If, like me, you love the rollicking, had-driving energy of the B-3, this is a CD not to be missed.

Siebels, longtime collaborator with singer Pat Boone and other first-tier jazz, blues and pop performers, performs primarily originals with three excellent covers for ths sound - Stevie Wonder’s high-energy “I Wish” (with a tenor sax solo from Goodwin), Neal Hefti’s ballad “Girl Talk” (done in a trio setting with wonderful guitar work by Grant Geissman) and Lalo Schifrin’s “The Cat.” Siebels’ “The Coupe,” “Not That There’s Anything Wrong With That,” “The Gospel According to Hammond,” and the Latin-tinged “Sort of Like a Samba” (done by quartet) stand out. There’s not a dud in the mix.

Freddie Hubbard, Without a Song 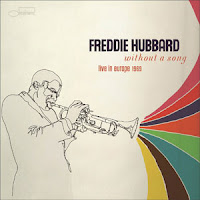 ops that had been blown out by his blistering style. This previously unissued recording was compiled from three concerts in England and Germany on a Jazz Wave on Tour visit 40 years ago this December with pianist Roland Hanna, bassist Ron Carter and drummer Louis Hayes.

There is a fascinating extended reworking of “Body and Soul,” a very strong opener with the title track, a comparatively tame version of “The Things We Did Last Summer” (with a few Hubbard upper-register flights) and a burning version of Dizzy Gillespie’s “A Night in Tunisia” that is also a Hanna showcase. Hubbard was in strong form throughout, in contrast to what we remember from recent comeback tries.

I confess that when I went to hear him a few years ago in Boston, I had to leave mid-way through the first song because listening to the music he was trying to make with his shot lips was so painful. For that sort of reason alone, this addition to the discography of Freddie at his prime Without a Song is most welcome. But it does not reach the pinnacle performances he turned live or in studio on The Night of the Cookers (recorded at Brooklyn’s Club La Marchal in 1965), Red Clay, and Blues for Miles. This is a June 2, 2009 release.
Posted by Ken Franckling at 10:25 AM