The basketball and hockey playoffs that are under way have proven once again that there is a home arena / hometown advantage. For proof, look no further than the Boston Celtics' epic first-round series with the Chicago Bulls.

That advantage also exists in music, as I was reminded when checking out the Blue Note 7 in performances two weeks apart in two different cities.

The all-star group’s show in Worcester, Mass. on April 1 was quite good, but the impact was numbed a bit by a half-empty house and the very large stage at historic Mechanics Hall.

I also caught them at Birdland in New York on April 16. I doubt the band coasted in any of its performances in its 50-city U.S. tour, but what a difference it makes to play at home in familiar surroundings, in front of critics and peers.

The band was tighter physically and emotionally, and the sound was top-notch. The resulting music was stunning from start to finish. A few times, when he wasn’t soloing, Nicholas Payton stood at the wa 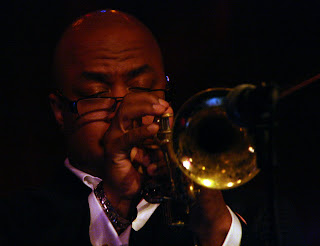 ll at the rear of the stage, and added some comping riffs - off mic, yet filling the room.

Nicholas Payton, Birdland, April 2009... >
The evening was punctuated by the ultimate musicians’ compliment… musicians who weren’t elsewhere that night or that set were checking out the band. Those in the room that night included Bob Sheppard, Eric Alexander, Anat Cohen, Jim Ridl, Roni Ben-Hur and Bill Mays. When the BN7 played its update to Herbie Hancock’s “Dolphin Dance,” pianist Bill Charlap noted that saxophonist George Coleman, who played on the original Blue Note session, was in the house - sitting close to the stage, holding court at his own table.

I suspect the six-night Big Apple winddown of the spring tour was like that every night. Those in the house the prior night, for example, included Steve Kuhn and Mike LeDonne.
Posted by Ken Franckling at 6:53 PM