Various artists, Coming Together, (Inarhyme Records)
This is a very special recording, both for the emotional performances - and their inspiration. Saxophonist Brendan Romaneck 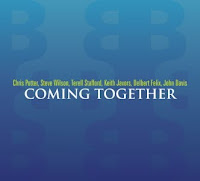 was killed in an April 2005 traffic accident, two weeks after his 24th birthday and two months before this session was planned, with all tunes and arrangements set. It was to have been his recording debut as a leader.

His family decided to proceed with the session with pianist-producer Keith Javors, trumpeter Terell Stafford and bassist Delbert Felix and drummer John Davis. Javors, who taught Romaneck at the University of North Florida’s fine jazz program and also hired him for his own working band, recruited Chris Potter and Steve Wilson to split the saxophone duties.

Romaneck’s spirit lives on through this recording, as do his very fine compositions. The CD also included takes on three standards that he chose for the session: “My Shining Hour,” “Nancy With the Laughing Face” and “Killing Me Softly With His Song.” My favorites: Javors’ and Potter’s stirring performances on the gorgeous and robust “Dream Behind The Winter” and Wilson’s soprano sax take on “Killing Me Softly…”

Sachal Studios Orchestra, Lahore presents Take Five (Sachal Music)
Timing is everything, and in the 50th anniversary of the Dave Brubeck Quartet’s Time Out recording, were treated to what may b 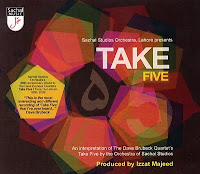 e the most unusual version of “Take Five” that you’ll ever hear. This take on the Paul Desmond tune features the Lahore, Pakistan-based Orchestra of Sachal Studios. This version fuses the tune with Indo-Pakistan classical instrumentation. It’s performed with sitar, tabla, sarod, Spanish guitars, percussion and an ample string section. The Spanish guitar tinge enhances the fusion here. This 5:42 CD single (plus a 3:12 radio mix) is an appetizer for a planned Jazz, Bossa Nova & Samba disc that also includes Jobim’s “Desafinado” and “The Girl from Ipanema,” as well as Erroll Garner’s classic composition “Misty.”

Capathia Jenkins and Louis Rosen, The Ache of Possibility (Di-Tone)
This is an interesting, genre-defying project - that sounds like the principals got caught in a vortex between jazz and folk 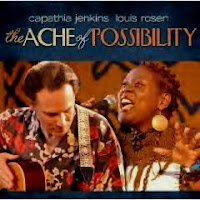 concerts/festivals. The Ache of Possibility is the latest effort by Broadway singer Carpathia Jenkins and guitarist/songwriter Louis Rosen, whose biting lyrics contain more of a folk-style message than we usually hear in a jazz context. Parts are reminiscent of 1960’s Freedom Now Suite and and 1961’s The Real Ambassadors recordings. The title track lambastes America’s political climate post 9/11 but also celebrates the hope (“the ache of possibility”) offered by the Obama presidency. Rosen’s lyrics on “The Middle-Class (Used-To-Be) Blues” cleverly take a look at today’s economic mess - (“My shoes need soles / And my soul needs love / But my love needs money like a cold hand needs a glove” etc., etc., etc. It’s not all political. There are also tracks about love and redemption, four of which are poems by Nikki Giovanni that are set to music. The jazz elements in this ambitious project are very good as well. This is a November 10 release.
Posted by Ken Franckling at 7:32 PM