Amanda Carr and the Kenny Hadley Big Band, Common Thread (Original Music)
This disc is terrific on a number of levels. It captures swinging singer Amanda Carr at her finest. It marks the hopeful rebirth 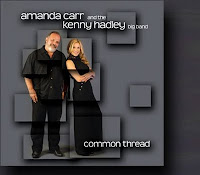 of the Boston-based Kenny Hadley Big Band after a seven-year absence, featuring many of the area’s finest jazz soloists. And it shines new attention on more than a dozen great big band arrangements crafted for this unit and Carr’s pleasant and direct delivery. And there’s another bonus. They stay away from the so-called “tired tunes” in the Great American Songbook, choosing instead to bring freshness and introduce new ears to a lot of under-performed gems. My favorites -”Something Wonderful Happens in Summer,” “I Understand” and Irving Berlin’s “The Song is Ended (But the Melody Lingers On).” There’s also a wonderful instrumental showcase for trumpeter Rick Hammett, who arranged the rarely heard Dizzy Gillespie-Walter Fuller tune “I Waited for You.” (This is an October 20 release.)

Also worth noting: Carr and Hadley have started American Big Band Preservation Society, Inc., a pending 501(c)(3) organization whose mission is “to preserve and promote American big band music through the preservation and performance of the great American songbook with an emphasis on acquiring, preserving and making publicly available unpublished big band arrangements.” The Web site is: http://http://www.americanbigband.org/.

CD as a leader is a dandy. And its title describes Cassity’s approach to her music. She’s a skilled writer, bandleader and player, as shown on this sextet session with trumpeter Jeremy Pelt, trombonist Michael Dease, pianist Orrin Evans, bassist Dwayne Burno and drummer E.J. Strickland plus three guests on several tracks. The band is tight and the music is well-developed. My favorites: “Song of Those Who Seek” and “No Turning Back.” The latter is a high-flying bop tune with a blistering and memorable solos from Cassity and Pelt.

Robert Kyle, Bossalicious (Dark Delishious Music)
The breezy blend of the tenor saxophone and Brazil’s enchanting rhythms have captured our fancy ever since Stan Getz put his stamp 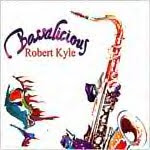 on the combination that fueled the bossa nova craze. On this quartet project with guests on two tracks, Californian Robert Kyle adds his own contributions both as a player (tenor sax and flute primarily) and a writer adding kindred material that stands up well alongside his interpretations of works by Jobim (“Favela” and “A Felicidade”), Lobo, Barroso and others. Favorites: his own “Carolina,” “Inspiração” and “The Long Goodbye,” guitarist Roberto Montero’s “Bossa Pra Um Bom Dia”, as well as their intriguing bossa take on “Nature Boy.” There’s also a beautiful extended version of Dori Caymmi’s “Amazon River.”
Posted by Ken Franckling at 7:35 AM