Gerald Wilson Orchestra, Detroit (Mack Avenue Records)
At a time when it seems difficult to keep a big band afloat, composer and arranger Gerald Wilson has the luxury of keeping tw 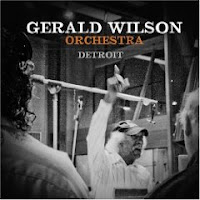 o big bands on call, one in Los Angeles, the other in the Big Apple. He used the L.A. band to produce the cornerstone of this ambitious project. It’s a six-part suite written in honor of the Midwest city where he spent five of his musically formative years, from 1934 to 1939. Detroit was bustling and publicly integrated, and that to Mississippi native Wilson meant freedom.

Each of the six parts can stand alone quite admirably with great moods and the harmonically solid and imaginative writing for which Wilson excels. You can feel aspects of the city’s energy throughout. My favorites are the Latin-tinged “Before Motown” and the rippling blues, “The Detroit River.” There is top-notch soloing throughout the project by tenor saxophonist Kamasi Washington, trumpeter Sean Jones (a guest from the N.Y. band), trombonist Eric Jorgensen, guitarist Anthony Wilson (Gerald’s son) and violinist Yvette Devereaux, and by trumpeter Winston Byrd on “Miss Gretchen,” which Wilson wrote in honor of label owner and jazz patron Gretchen Valade. Wilson’s equally top-notch New York band recorded the two non-suite pieces, “Everywhere” and “Aram,” that close the disc.

Arturo Stable, Call (Origen Records)
Percussionist Arturo Stable and his bandmates have created a gem in Call, which blends the Afro-Cuban rhythms of his homeland

with other strong influences from around the globe, but most notably the bebop tradition and intensity that remains the bedrock of jazz. His bandmates are Aruan Ortiz on piano, Edward Perez on bass, Javier Vercher on brass and reeds, and Francisco Mela on drums, with special guest Ian Izquierdo on violin on the title track. The music on all 10 originals is riveting and bubbles with beautiful energy and ideas. Favorite tracks: “Call,” “African Sunrise,” “Spider Web.” and “Old Memories,” which features a gorgeous piano solo by Ortiz.
Posted by Ken Franckling at 9:48 AM