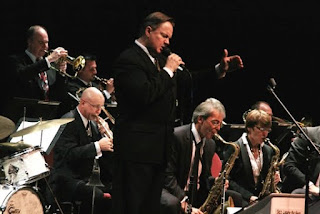 The first set principally was a tribute to the Woody Herman big band legacy. Most of those tunes had been arranged for the Herman band by John Fedchock, Frank Foster, Bill 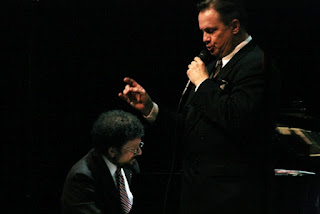 Holman and Patrick Williams. When the band did break out of the Herman material in set one, it was to tip a hat to Frank Sinatra, as on trombonist Greg Nielsen's superb solo on "All The Way." Tenor saxophonist Rex Wertz and Renzi cooked together on the band's take on John Coltrane's "Central Park West," which Fedchock arranged for Herman's band.

Renzi was featured on "I've Got the World on a String." The pianist never overplays either as an accompanist or soloist. He is a master of improvising off a band's charts - always tasteful, sparkling and clever. He and Pruyn have a wonderful chemistry, which was very much evident during the leader's Mel Torme tribute that made up the second set.

Pruyn has a Torme-like voice and has nailed some of the master's facial expressions and gestures. However, he never mimics Torme. This is more admiration and appreciation. He toured with Torme at times as a trumpeter in his big band. Renzi spent time as pianist for Torme among many others over the years. They included Blossom Dearie, Lena Horne, Cleo Laine and Jack Jones.

Pruyn interspersed big band arrangements with a few trio spotlights (Renzi, bassist Mark Neuenschwander, drummer Greg Parnell) during the Torme set, including "A Nightingale Sang in Berkeley Square" and "Pick Yourself up." Pruyn and Nielsen shared the spotlight on Rob McConnell's big band arrangement of the wistful "If You Could See Me Now." Without any other accompaniment, Pruyn and Renzi were superb in interpreting "The Folks Who Live on the Hill." Pruyn extended the vocal tribute one step by performing two tunes that Torme performed regularly as his nod to First Lady of Song Ella Fitzgerald: "Stairway to the Stars" and "Lady Be Good."
Posted by Ken Franckling at 12:17 PM