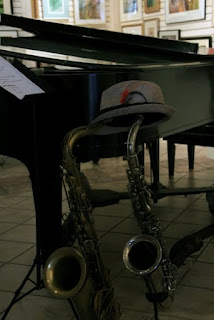 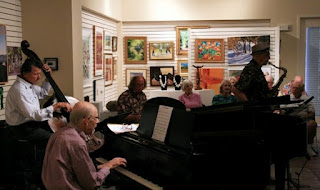 Drischel is known in southwest Florida as "Dual Sax Ron" because he likes to play tenor and alto simultaneously at times to thicken the harmonies in his solos or comping. He used that technique sparingly in this concert - as an introduction on "Blue Skies" and a brief interlude midway through "I'm a Fool to Want You." He doesn't belabor tunes, unlike some soloists who stretch them to the point of exhaustion. He enjoys brevity, sometimes opting for abrupt endings because he's ready to move to the next tune he wants to share.
The Cincinnati native had superb support for this concert: pianist Tommy Goodman, bassist Dominic Mancini and drummer Johnny Moore. The two-hour concert drew a crowd of more than 90 people.
Posted by Ken Franckling at 9:43 AM