Today’s mail brought a terrific surprise…a copy of the latest Miles Davis compilation, Warner Brothers’ European division’s five-CD boxed set Miles Davis The Warner Years: 1986-1991, which was released this fall in Europe. This project was first planned in 2001 with Rhino as a six-CD set. That was shelved due to legal and licensing issues. It is now out minus a bit of the originally planned material.
The surprise? The cover and spine of the box feature a Miles photo t 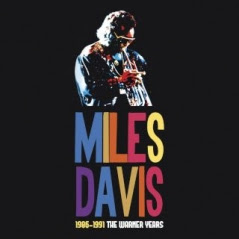 hat I took at a jazz festival appearance in 1987. I had been in contact with Rhino folks about providing some imagery back when the initial project was in the works, but hadn’t even heard of the project's revival. As serendipity would have it, Warner Music France obtained the image through Dalle, a stock photo agency in Paris to which I have been submitting music photography for many years.

The Warner Years offers the complete albums Tutu (1986), Amandla (1989), Live Around the World (1996), the historic Miles and Quincy Live at Montreux (1991), on which Davis revisited his 1950s repertoire with Gil Evans for the first time in decades at the Montreux Jazz Festival, and Doo-Bop (1991), plus seven elections from the soundtrack of Dingo (1991) and five from Siesta (1987). Disc 5 includes four previously unreleased songs and performances on which Davis accompanied Scritti Politti, Cameo, Chaka Khan, Zucchero, Kenny Garrett, Marcus Miller and Shirley Horn.

There is much here to enjoy from Miles’s final creative phase when he further blurred the jazz star/pop star boundaries.