Jazz at the end of the dirt road

(updated with times and Web links)
Regulars turn out in large numbers for a free three-hour Tuesday night jazz jam, at Snook Haven in Venice, FL. The no-frills restaurant, footsteps from the scenic Myakka River, is literally at the en 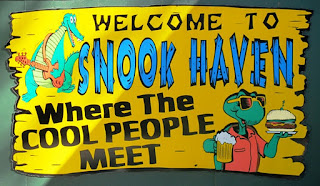 d of a dirt road canopied by Spanish moss. In its storied past, the venue was a smugglers’ hideout during prohibition, a speakeasy and brothel and the jungle setting for some Hollywood films. Snook Haven was formally established in 1948 as a fishing camp. Today it features the small restaurant, a variety of indoor and outdoor musical events, cabins, boat launch and tours of the Myakka River and Charlotte Harbor.

The jam sessions are the weekly glue for the South County Jazz Club, which was formed in July 2010 to support musicians and provide live listening opportunities for fans in and around Englewood, North Port and Venice on Southwest Florida’s Gulf Coast.

Jazz Club president Morrie Trumble says the organization has swelled in less than 18 months from its five founding board member to more than 200 people. The club sponsors some 70 events a year. They include the jam sessions, 11 formal concerts at the Venice Art Center, and seven Eat to the Beat concerts held one Sunday afternoon a month October through April) at La Stanza, an Italian restaurant in neighboring Englewood.

Trumble says Snook Haven management offered the rustic venue as a jam session home last year and the weekly event (from 5:30 to 8:30 p.m.) has proved to its busiest night on average. Some of the participating musicians are year-round residents and some are so-called snowbirds who reside here in the winter months.

The three-hour jam featured a changing cast of musicians performing standards from the American Songbook, jazz chestnuts and Brazilian repertoire. (“Bye Bye Blackbird,” “Besame Mucho,” “Somewhere Over the Rainbow” and “Pennies from Heaven” among the many offerings this night.

"I like this kind of scene,” guitarist Boffa said between sets. “It’s a great vibe. And Dominic is as good a bass player as I’ve ever heard.”

The jam was a great opportunity to savor the skill of Goodman, a former New Yorker whose subtle and inventive comping illuminated the arranger’s touch he brings to his improvisation.

Snook Haven is an informal room where the regulars and the wait staff know each other by first name. The stage is flanked on the left by a taxidermist’s delight, including a skunk, a small bear and even an alligator’s toothy head, which Goodman used as a hat rack for the night.

Posted by Ken Franckling at 4:52 PM