Nothing tells me more that the pandemic’s extended jazz pause is over than the arrival later this month of the 2021 edition of the Newport Jazz Festival. There was none in 2020, a tough year for musicians and live-music fans alike across North America and around the globe.

Virtually all festivals and in-person concerts were cancelled after mid-March, giving rise to a steady output of streamed performances from venues (with audiences), or in a lot of cases, from musicians’ living rooms, stoops, driveways, or socially distanced spaces in public parks. 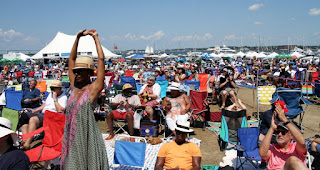 But Newport is back, albeit with health protocols in place, and only 60 percent capacity allowed at Fort Adams State Park overlooking Newport Harbor and the graceful span of the Sen. Claiborne Pell Newport Bridge in the distance. The attendance limit means the fort can accommodate 6,000 jazz fans, compared to years when 10,000 was a sellout. And there will be just two stages compared to the four in a normal festival year.

Speaking of numbers, this will be my 40th consecutive trip to Newport Jazz since founding producer George Wein brought the festival back to Newport in 1981 after a 10-year absence. Over the years, I have covered it as a writer and/or photographer for a wide array of publications. They have included United Press International, Jazz Times, Offbeat, Swing Journal, allaboutjazz.com, and of course, this Jazz Notes blog.

Here is a link to the three-day Newport schedule for 2021, which runs July 30-August 1. Music  is scheduled from noon to 7:30.p.m. on the Lawn Stage (the festival’s main stage, previously called the Fort Stage) and 11:20 a.m. to 6:15 p.m. on the Quad Stage, which is set up on the parade ground inside the stone walls of Fort Adams.

There will be no Friday night event at the International Tennis Hall of Fame. The Newport Jazz Festival expects to return to its full scale and scope in 2022.