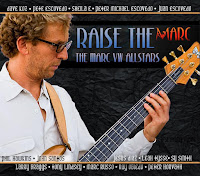 
The CD will be released July 14 on the producer's Peter Michael imprint. It’s now available as a digital download here. One track, "Oakland in Da House," was included from an earlier Sheila E. album, captures her band onstage at Yoshi's. It is the only song on Raise the Marc on which Marc VW plays. All proceeds from the CD and digital download sales will benefit Marc and his family, who have been facing substantial medical expenses.


Van Wageningen and Garibaldi were hit by a train near Jack London Square about 20 minutes before the band’s scheduled show at Yoshi’s. Police said four people tried to cross the tracks — while the warning guard arms were still down — after a freight train slowly chugged by. They didn’t see an Amtrak train traveling from the opposite direction on another track. Garibaldi and Van Wageningen were not able to jump out of the way.


In addition to January benefit concert to help both musicians, a Go Fund Me initiative has raised more than $55,000. A second GoFund Me effort has raised an additional $81,000 to date toward van Wageningen’s considerable expenses.

Dig in and help if you can.
Posted by Ken Franckling at 4:04 PM