The Jimmy Amadie Trio, Live at the Philadelphia Museum of Art (TPR) 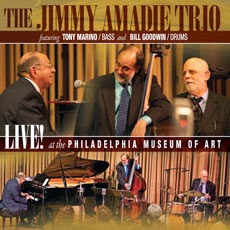 If you’re a lover of the jazz piano trio traditional format (piano, bass, drums) this project is one to savor and appreciate for many reasons. It marked pianist Jimmy Amadie’s first public performance in 44 years. In his early years, Amadie accompanied Red Rodney, Charlie Ventura and Mel Torme and worked in Woody Herman’s big band – until severe tendinitis stifled his performance career for 30 years. (He became an influential educator and continued to play piano in his head rather than with his hands.)


After multiple surgeries, the pianist got enough strength back to record an album in 1994 and 1995 – one track at a time, 16-week intervals between tunes. After three more studio recordings and cancer-related interruptions, Amadie decided he could muster the strength for one live performance. He’s backed by bassist Tony Marino and Phil Woods’ longtime drummer, Bill Goodwin. He fought through the pain with his sparkling style and artful passion on these dozen standards. As Amadie explained: “Pain can try to stop you but passion overcomes it.” It’s fitting that the session opened with “There is No Greater Love.” Highlight: the trio interplay and invention on “Softly as in a Morning Sunrise.” Check it out. Your appreciation of jazz the compulsion to make music will be richer for it.


Lili Añel, I Can See Bliss From Here (Laughing Bull) 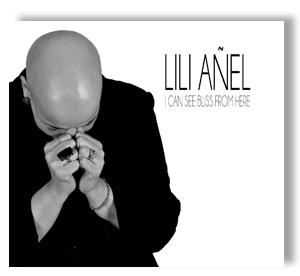 Think Joan Armatrading. Think Nina Simone. Then blend them together. That jazz and folk fusion is the intersection where we find the songs and wisdom of Lili Añel. I Can See Bliss From Here is her sixth recording as a leader. It is a gem, just like its 2009 predecessor Every Second in Between. Several songs, like “Climb the Wall” and “Losing My Faith,” are vivid personal takes on America’s continuing economic woes. The highlight is the brilliant and clever autobiographical journey “Something to Do,” which gets a full-throttle treatment from its Afro-Cuban rhythm, Latin percussion and crack horn section. Dale Melton of the Philly-area band The Melton Brothers co-produced the CD with Añel. He also played acoustic piano, Hammond organ or Wurlitzer on most tracks. Singer-songwriter-guitarist Añel wrote nine tunes on this project. She also covers Ray LaMontagne’s “This Love is Over” and Jef Lee Johnson’s “Today,” the latter recorded just with voice and guitar. This latest project shows that music that comes from Añel’s experiences, and her heart, is powerful indeed. 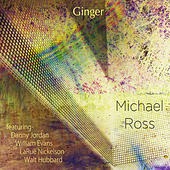 Michael Ross, Ginger (Roscoe)
Sarasota, FL-based bassist Michael Ross is out with an interesting gem, teaming him with a variety of fine players. They are pianist William Evans, guitarist LaRue Nickelson, reed player Danny Jordan and drummer Walt Hubbard. They swing with a modern jazz sensibility. Favorite tracks include Ross originals “Life of Riley” and “Ginger” and the lone jazz standard, Duke Ellington’s “I Got It Bad (and That Ain’t Good.” “Yak Attack” is reminiscent of Miles Davis’s Jack Johnson-era, with Evans shifting to Fender Rhodes for its electronic feel. Nickelson’s fret work shines throughout, but is most prominent on “Life of Riley.” Dig it.