The 34th annual Montreal International Jazz Festival is fast approaching. The dizzying event – which often seems like two festivals in one – runs June 28 through July 7. The schedule also features a couple of preliminary concerts on the 27th.


There’s the vast array of indoor ticketed concerts. Then there are the 300 FREE concerts on 10 outdoor stages featuring some 3,000 musicians before the 10-day run concludes. Those sets run the gamut from jazz and blues to pop and world music.

Each year, the festival presents awards to significant artists for their contributions to their various forms of music. Here’s a rundown of the 2013 honorees:


·         Canda’s own Holly Cole will be the 15th recipient of the Ella Fitzgerald Award, conferred in recognition of the versatility, improvisational originality and quality of repertoire of a singer renowned on the international scene.


·         Saxophonist Charles Lloyd will be the 20th recipient of the Miles Davis Award, which honors a great international jazz musician for the entire body of his or her work and for that musician’s influence in regenerating the jazz idiom.


·         Amadou & Mariam (Amadou Bagayoko and Mariam Doumbia), a musical couple from Mali, will be the recipients of the 10th Antonio Carlos Jobim Award. It honors artists distinguished in the field of world music whose influence on the evolution of jazz and cultural crossover is widely recognized.


·         Bass player Alain Caron will be the 25th artist to receive the Oscar Peterson Award, which honors a Canadian musician who has made outstanding contributions to jazz in Canada.


·         American record producer Tommy LiPuma will receive the festival’s fifth Bruce Lundvall Award, which is presented annually to a non-musician who has left a mark on jazz or contributed to the development of the music, through the media, the concert or record industries. 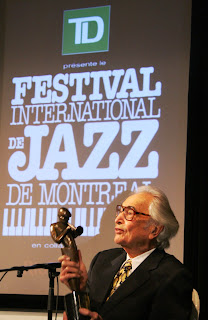 
Artists performing at the festival’s acclaimed Invitation Series this year include Charles Lloyd and pianist Vijay Iyer. Each will be featured in different instrumental combinations of his choice for several consecutive nights.


One of the more poignant shows comes on the final night, July 8, with a Brubeck Brothers Quartet tribute to pianist Dave Brubeck, who died last December. The event at the Theatre Jean-Duceppe will also feature three guest artists from Montreal: pianist Lorraine Desmarais, bassist Adrian Vedady and saxophonist Chet Doxas. Dave Brubeck was honored with a special edition of the Miles Davis Award before his Montreal appearance in 2010.
Posted by Ken Franckling at 4:37 PM