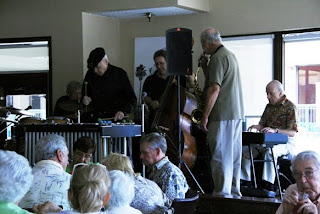 
Julie was diagnosed with breast cancer, has had three surgeries and faces significant radiation and medication treatments. The estimated cost for all of this is into six figures and – as sometimes the case with musicians and their families – the Royals have been facing this with no health insurance. 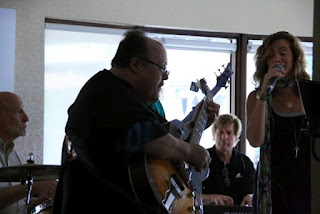 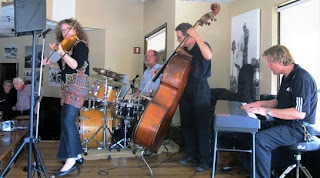 Drummer Al Hixon, Mark Neuenschwander and Michael Royal formed the core rhythm section for the afternoon, though the sitting in created a lot of personnel variations on the bandstand. At least a half-dozen musicians stopped by to support the event but were unable to perform due to scheduling conflicts that afternoon.

"There is a lot of love in this room today," Michael Royal told the crowd. "Everybody is here to play today. This has been beyond my wildest dreams."
Kudos to Al Hixon and South County Jazz Club president Morrie Trumble for their tireless work in organizing the event. And kudos to all of you who stepped up to support the Royals.

If you couldn't attend, it's not too late to help the cause.
Checks should be made out to Michael Royal, and mailed to:
Michael Royal
c/o South County Jazz Club
1435 East Venice Ave #104-172
Venice, FL
34292
The Jazz Club of Sarasota is also planning another fundraiser on May 11 as part of its Jazz at 2 performance series.