The South County Jazz Club concluded its 2011-12 concert season this afternoon with a concert spotlighting cabaret singer Kitt Moran, who has become an entertainment staple in Southwest Florida over the past eight years. She was backed by her husband, pianist and arranger Mike Moran, and bassist Dominic Mancini
at the Venice FL Art Center.

Moran tilted her sets to included a significant number of tunes with jazz origins, in addition to offering some staples from the American Songbook material that is at the heart of her repertoire. The jazz classics included a handful of tunes by Dave Frishberg ("My Attorney Bernie," "I Want to be a Sideman," "Sweet Kentucky Ham," "Let's Eat at Home" and his "I'm Hip" collaboration with Bob Dorough). She also dusted off a vocal version of Paul Desmond's "Take Five," Peggy Lee's "I Don't Know Enough About You" and Billy Strayhorn's poignant "Lush Life." 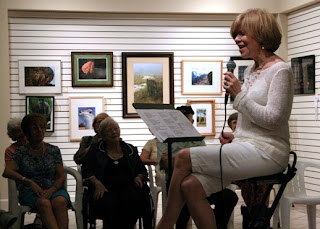 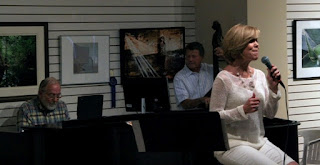 Highlights included her take on Murray Grand's "Guess Who I Saw Today" (a hit for Nancy Wilson) and "Blues for Duke," a Duke Ellington tribute piece that Mike Moran co-wrote with late record producer and saxophonist Teo Macero. Mancini injected heavy doses of jazz soloing throughout the afternoon, capitalizing on his honeyed bass tone, complementary and conversational ideas - and rock solid timekeeping.