When most of us outside of Canada think jazz and Montreal, we think early summer. Equipe Spectra, the organization that produces the Festival International de Jazz de Montreal, wants to make that linkage year-round. It makes sense, as the city has a jazz hunger that extends beyond the summer season, no doubt whetted by the two-week extravaganza that ranks as the largest and generally the finest jazz festival on the planet. This year's 30th edition runs June 30 to July 12.

With expansion of the Place des Arts, the general home of the festival, into a full-blown Quartier des Spectacles, Equipe Spectra has transformed a neighboring former warehouse building into a multi-story, multi-purpose facility called Maison du Festival Rio Tinto Alcan (“House of the Festival” for short).

The centerpiece is L’Astral, a state-of-th 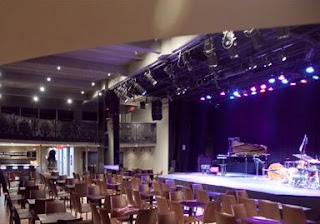 e-art, 350-seat, cabaret-style showroom. The venue will open June 29 with a pre-festival concert by Montreal pianist Oliver Jones (back from retirement once again) and singer Ranee Lee, and a public concert by the same pair on the 30th.