(Futurism Records)
With the fun-filled spirit, wide stylistic range of original material and plethora of guest artists who have touched guitarist Grant G 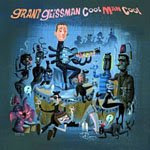 eissman’s musical life, this feels like a house party. Cool Man Cool is a party to which he invited old friends, colleagues, bosses and even the teacher (guitarist Jerry Hahn) who had the most indelible impact on his versatile style.
The guest list includes a lot of household names from the music world, his first high-profile boss, Chuck Mangione; pianist Chick Corea, who worked in Mangione’s jazz quintet in the mid-1960s; saxophonist Tom Scott; pianists Patrice Rushen and Russell Ferrante; saxophonist Tom Scott; and percussionist Alex Acuna among many.
It is great to hear Corea and Mangione collaborating on what Geissman calls the sound that likely would have resulted on a 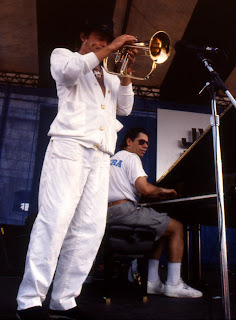 recording they planned but never got around to (though they have sat in with each other at jazz festivals on occasion).
Chuck Mangione and Chick Corea
Newport, August 1988 ... >
My favorite tracks include the funky shuffle-beat sound of “Nawlins,” featuring Geissman with Mangione, Rushen, B-3 player Emilio Palame and drummer Ray Brinker among others; the leader’s “One for Jerry” interplay with Hahn (who provided two years of weekly lessons that required a 180-mile round-trip drive for Geissman as a high school senior and college freshman); and the bop changes of “Dig Some Sides?” Brinker, bassist Trey Henry and saxophonist Brian Scanlon are making return appearances from Geissman’s Say That! session in 2006.

(Jazzed Media)
Bop lovers rejoice. This one’s for you. Cleveland-based drummer Glenn Davis, who spent 11 years on the Boston scene and several more i

n the Big Apple, is out with a wonderful session that features alto sax master Phil Woods as a special guest on three tracks - two Davis originals and the Tadd Dameron standard “If You Could See Me Now.”
As a leader, Davis gives his players plenty of room to stretch, and is a no-frills, swinging drummer who seems disinterested in being the center of attention. His solos are succinct and on point. This group includes Dave Sterner on alto and soprano sax, Jack Schantz on trumpet/flugelhorn, Mark Soskin on piano and Dean Johnson on bass. Stylistically, in both the range of the writing, and the masterful playing, there is much here to love, including Davis’s own “Just a Tadd” tribute to Cleveland native son Dameron, which features Woods and Sterner.

Rick Germanson Trio, Off the Cuff 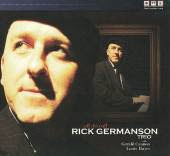 ist Rick Germanson’s primary gigs have included eight years with the Cannonball Legacy Band and a four-year stint with guitarist Pat Martino. He’s worked for about 15 years with bassist Gerald Cannon, a fellow Milwaukee native. Drummer Louis Hayes, a member of the original Cannonball Adderley quintet, leads the Cannonball Legacy Band.
The empathy among the players is quite evident – and provide a wonderful showcase for Germanson’s composition and swinging, crystalline playing. The band’s Freddie Hubbard tribute transforms the late trumpeter’s “Up Jumped Spring” into a meditative ballad. Germanson’s solo improvisation, “The Way of Water,” sounds a bit like the many nuances one would hear in an extended hike along a stream – from ripples and eddies to breathtaking waterfalls just around the bend. “Brick” is an uptempo burner with multiple high-spirited inspirations. I love the Tyner-like energy of “Daytona,” a clear contrast to Germanson’s pensive “Jill’s Song,” a tribute to the late sister who got him started on the piano.

The Stanley Clarke Trio, Jazz in the Garden

(Heads Up International)
People who think of bassist Stanley Clarke, the young Japanese pianist Hiromi Uehara and drummer Lenny White for their pop and fusion sides or technical bombast are in for a surprise. This intimate straig 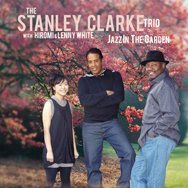 ht-ahead jazz CD project delights with its powerful empathy and subtleties. It is loaded with bop and popular standards, as well as originals.
My favorite tracks for the aforementioned subtleties are Clarke’s “Paradigm Shift (Election Day 2008),” the trio’s take on the traditional Japanese folk song “Sakura Sakura,” Hiromi’s “Sicilian Blue,” an intimate version of “Some Day My Prince Will Come.” The burners here include their takes on Joe Henderson’s “Isotope,” Miles Davis’s “Solar,” Hiromi’s own “Brain Training” and the Red Hot Chili Peppers’ 1991 hit “Under the Bridge.” This is a beauty, filled with freshness, vitality and simpatico.
Posted by Ken Franckling at 6:37 PM