Jazz and its makers link to other artistry

Many musicians aren’t one-trick ponies when it comes to artistry. Trumpeter Miles Davis, clarinetist Pee Wee Russell, bassist John Heard and singers Tony Bennett, Kate Westbrook and Meredith d’Ambrosio are just a few who have had solid reputations as painters.

Louis Armstrong took his off-the-bandstand creativity in a slightly different direction when he was on the road. The many hours he spent in his hotel room or dressing room while waiting for concerts provided the time and motivation to create more than 500 collages that were crafted from a variety of inspirations: newspaper articles, ph

otos, his mail and even telegrams.

An exhibit of his art, called A Little Story of My Own: Louis Armstrong’s Collages, opened today at The Louis Armstrong House Museum at 34-56 107th Street in the Corona section of Queens, N.Y., and runs through July 12. 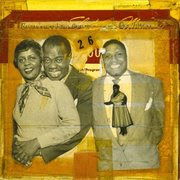 A Little Story of My Own provides the public a rare opportunity to view the collages. Except for several that were loaned to a national traveling exhibit sponsored by the Smithsonian Institution in the early 1990s, Armstrong's collages have never been exhibited outside of the Louis Armstrong House Museum, in large measure because they are so fragile. All but one of the collages in this exhibit are on view for the first time.

Museum Director Michael Cogswell likens Armstrong’s collages to his jazz improvisations. “Found material is divided and then rearranged to create new meanings. Many of Louis’s collages display multiple layers of meaning which are more intuitive than deliberate,” he said. Armstrong felt the same way, writing a friend in 1953: “My hobbie (sic) is to pick out the different things … and piece them together … making a little story of my own.”