George Wein has added a great variety of musicians to his lineup for the jazz festival in Newport in August, scheduled August 7-9 and called "George Wein's JAZZ FESTIVAL 55."

This will be the 55th anniversary of the Newport Jazz Festival's first edition back in 1954. And the Friday night opener, as usual, is at the Newport Casino (International Tennis Hall of Fame) site that was the festival's home in 1954. 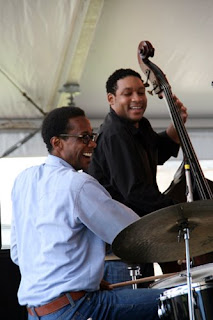 uo, the Vandermark 5, and Rashied Ali-Charles Gayle-William Parker's "By Any Means.

Here is the full schedule as of today:
FRIDAY, AUGUST 7 - International Tennis Hall of Fame, 8 p.m.
Etta James and The Roots Band