The 2022 edition of the storied Newport Jazz Festival is fast approaching. The three-day event at Fort Adams State Park, overlooking picturesque Newport harbor, will be back to full strength.

Saxophonist Gary Bartz, drummer Jack DeJohnette and bassist Ron Carter, who turned 85 on May 4, are the festival elders amid a lineup that seems to get younger by the year. Newport draws a demographically wide-ranging crowd where there are a lot more younger faces in the audience than seen at a lot of other jazz venues. That is a good thing.

This will be my 41st consecutive  Newport Jazz Festival as an assigned journalist and/or photographer. I'm particularly looking forward to the healthy mix of New Orleans artists on the bill: Blanchard, Nicholas Payton, pianist Sullivan Fortner, PJ Morton, the Tuba Skinny trad jazz/Americana band, The Nth Power and The Soul Rebels brass band.Others on my checklist include bassist Carlos Henriquez' nonet, pianist Emmet Cohen's trio, young singer Samara Joy's quartet featuring guitarist Pasquale Grasso. Also saxophonists Melissa Aldana and Nubya Garcia, trumpeter Giveton Gelin, guitarist Dan Wilson, drummer Antonio Sanchez and singer Thana Alexa (both in his quartet and her Ona project), the Maria Schneider Jazz Orchestra and the Mingus Big Band.
One thing not to be missed is Sunday's finale, a set celebrating the legacy of the festival's founding producer, George Wein. He who died last September 13, just three weeks shy of his 96th birthday. Wein tribute performers will include Trombone Shorty, pianist Hiromi, and bassist & festival artistic director Christian McBride, plus others not yet announced. With a surprise walk on or two always possible at Newport, it should be quite something.

As I view it, the fact that this Rhode Island festival continues in robust fashion after more than a few fits and starts through the years, makes the entire weekend a tribute to George Wein and his imprint on the arts of presenting and producing musical events. His vision and impact on jazz and music festivals around the globe since Newport's beginning in 1954, are almost beyond measure. 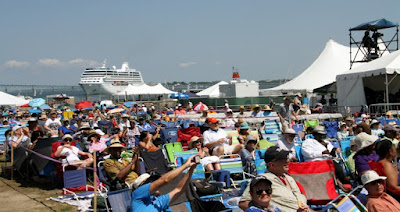