A month for saxophonists

In my mind, June is a month for saxophonists. At least this June. For this jazz journalist. 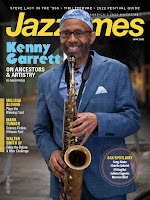 I've known Harry since he was a junior in high school back in 1983. It is always great to hear and talk with this musician whose high-quality recording output in the U.S. and abroad is prolific to say the least.

The June issue of JazzTimes includes my extensive profile of saxophonist Greg Abate.

He talks about his early-career road stint with Ray Charles, his evolution into a hard-bop ambassador, his important collaborations with late alto sax master Phil Woods, and much more.

Greg was a natural fit for this issue, which spotlights a variety of sax players. They range from early 30s players Marcus Elliot, Julieta Eugenio and Melissa Aldana to Preservation Hall Jazz Band veteran Charlie Gabriel, who is just out with his first recording as a leader at age 89. The others include Eli Degibri, Kenny Garrett, Walter Smith III and Mark Turner, as well as the late Steve Lacy.

Greg and Harry came out of the Rhode Island jazz scene, where I got to know them well over the years. Harry is 55. Greg turned 75 on May 31.