Love - and Bossa Nova - were in the air

Eighteen months since its 2019-20 concert season was cut short by the pandemic, and its 2020-21 season canceled, the Charlotte County Jazz Society had music in the air again on Wednesday, September 22. A matinee “Love and Bossa Nova Live” performance by guitarist Nate Najar and Brazilian singer Daniela Soledade was a mighty welcome warm-up for the CCJS evening concert series, which resumes in October.

The St. Petersburg-based couple performed for CCJS at the Grill at 1951 in Port Charlotte, treating the crowd to the joyous, exotic intimacy of bossa nova and samba. Soledade, a third-generation member of a Rio de Janeiro family with strong ties to the roots of bossa nova, is blessed with a captivating, wide-ranging voice whether singing in her native Portuguese or English. Most of the lyrics this day were in Portuguese, a few blended both languages, and a few more were shared in English. Najar, a classically trained acoustic guitarist, was the ideal complement in this intimate setting, celebrating the melodies and never overbearing, even in his solo feature segment. He is a guitar artist of great delicacy, inspired greatly by the sound and stylings of the late Charlie Byrd.

It was an afternoon for the music of Antonio Carlos Jobim, Ary Barroso, Dorival Caymmi, Roberto Menescal, Baden Powell, the singer’s grandfather, Paulo Soledade, and her father, Paulinho Soledade, among others. The Jobim covers included "Double Rainbow," "Wave" "Fotografia" and "One Note Samba."

Most touching moments in an afternoon full of them by this very fine duo: 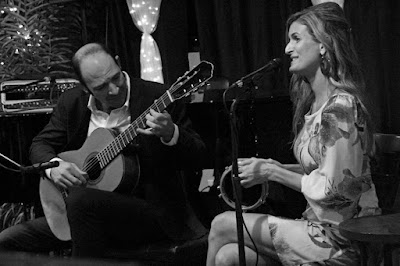 Posted by Ken Franckling at 6:21 PM