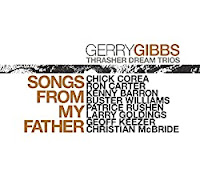 What a dandy this is. Drummer Gerry Gibbs criss-crossed the country during the pandemic to record with four different versions of his trio. They included Gibbs with Chick Corea and Ron Carter, Kenny Barron and Buster Williams, Patrice Rushen and B-3 player Larry Goldings, and Geoff Keezer and Christian McBride. This turned out to be Corea’s final recording session before his death last February. The bands performed 18 pieces composed by Gerry’s father, 96-year-old vibes player Terry Gibbs, plus one tribute composition from Corea called “Tango for Terry.”

This is one funky and spirited project. Corea penned a fresh arrangement for the vibes master’s “Waltz for my Children,” then delivers it with Carter and Gibbs. The Barron-Williams-Gibs trio gets the party started on “Kick Those Feet.” The blend of piano, B-3 and drums for the trio with Rushen and Goldings adds a different slant to the proceeding on “Smoke ‘Em Up” and “Townhouse 3.”  The piece de resistance is “Hey Chick,” the only tune on which Corea didn’t play. It’s a tribute to him. It’s a retitled update of Terry’s 1961 composition “Hey Jim”… that features all eight other players, plus Terry Gibbs’ vibes solo extracted from the original Straight Ahead quartet version. 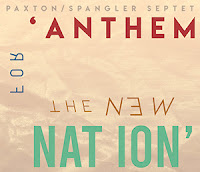 The Detroit band co-led by trombonist Tbone Paxton and percussionist RJ Spangler has a deep love for the exotic, rhythmic sound of South African jazz. This latest project explores some of the music composed by pianist Abdullah Ibrahim, known in his early days as Dollar Brand. It captures the beauty, the soul and the vibrance of seven of his works, including “African Marketplace,” “Soweto” and the title track, which Ibrahim first  recorded in 1978. The septet’s blend of “Cape Town Fringe” and “Mannenberg” uses an arrangement by tenor saxophonist Pharoah Sanders. Rafael Leafar’s alto sax solo on this one celebrates Sanders’ intense virtuosity. Special guest James O’Donnell’s spirited flugelhorn solo enhances the bubbling beauty of “Soweto.” From start to finish, this is powerful stuff, and a long-overdue tribute to this South African jazz pioneer and NEA Jazz Master. 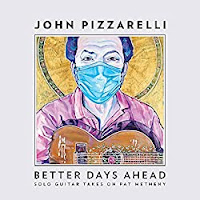 The CD cover title and cover art is perfect. John Pizzarelli with his guitar and a baby blue mask over his lower face – waiting for Better Days Ahead. The swing guitarist used the isolation of the pandemic to make his first solo recording – one that explores the Pat Metheny songbook. Pizzarelli put his own loving spin on 14 Metheny or Metheny-Lyle Mays originals, exploring the beautiful folk-tinged melodies on his acoustic guitar. “James,” “Last Train Home,” “(It’s Just) Talk,” “Letter From Home” and “Farmer’s Trust stand out, but there’s not a disappointing track in the bunch. He created one track from two tunes, skillfully weaving “April Wind” and “Phase Dance,” both from Pat Metheny Group’s eponymous 1978 debut album. There is much here to love. 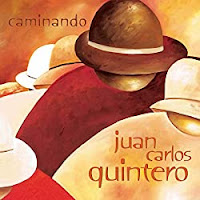 How did this beauty not catch my ears back in 1997? The Colombian-born, L.A.-based guitarist released it back then as The Way Home! Long out of print, this instrumental shows Quintero in fine form as a composer and player,  supported by pianist Joe Rotondi bassists Eddie Resto and Alec Milstein, and five percussionists: Angel Figueroa, the late Munyungo Jackson, Tiki Pasillas, Ron Powell and Walter Rodriquez. Quintero’s melodies and the exotic Latin rhythms (bolero, cha cha, flamenco rumba and Colombian cumbia) are intoxicating to the ears – from the opening bars right through the end of this world music-meets-jazz project.  Favorites: “El Baile,” the ballad-like “The Way Home,” “Little Indians” and the festive “Caribbean Sun Dance” which was co-written by Kenny Hudson. 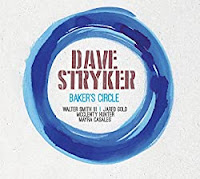 Guitarist Dave Stryker has another winner on his latest outing. This organ quartet session features the leader with Jared Gold at the B-3, Walter Smith III on tenor sax, and McClenty Hunter on drums. Percussionist Mayra Casales joins on three tracks (Stryker’s “El Camino” and “Baker’s Circle,” and Mrvin Gaye’s “Inner City Blues”). Favorite tracks: the bluesy “Dreamsong,” Gold’s “Rush Hour” featuring Smith’s tenor mastery, the leader’s elegant takes on Leon Russell’s “Superstar” and Ivan Lins’ “Love Dance,” and the gorgeous title track. The latter is dedicated to the late educator David Baker, who ran the jazz program at Indiana University – and hired Stryker as a guitar professor a few years ago. This one is smoking from start to finish.

Posted by Ken Franckling at 1:15 PM