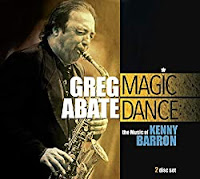 Half of the tunes feature the leader on just one horn apiece, for example, flute on the genteel ballad “Water Lily,” soprano on “Sonia Braga” from Barron’s 2012 Brazilian Knights project, and tenor on the lively opener “Sunshower” and the pensive beauty “Rain.” After the three-day studio session last September, Abate added tasteful overdubs on the remaining tunes, pairing alto and tenor on “Golden Lotus” and “Lemuria,” flute and alto on “Cook’s Bay,” then alto and bari on the closer, “And Then Again.”

The most ambitious was Abate’s treatment on two of Barron’s best-known compositions, His overdubbing created a full big-band sax section as he explored “Innocence” and “Voyage,” soloing on soprano and alto respectively. As a result, we get to hear rich riffs, interlude melodies and harmonies that reveal rich new facets that underscore Barron’s compositional prowess. And how great it is that Barron was along for the ride. 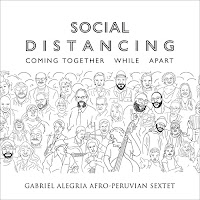 Peruvian-born trumpeter Gabriel Alegria pretty much nailed the Impact of the year 2020 on his sextet’s newest project Social Distancing¸which is subtitled Coming Together While Apart. The music reflects the varied spirits of much that transpired last year, from the impact of the pandemic to the bubbling issue of social justice. The core is “Social Distancing,” a four-part suite that captures a wide range of musical emotion. The suite includes Covid 19” (featuring special guest Russell Ferrante on keyboard), “The Mask,” “George and Breonna” (written about the George Floyd and Breonna Taylor” killings) and “The New Normal.”

The sextet includes drummer Hugo Alcázar, percussionist Freddy "Huevito" Lobatón, bassist Mario Cuba, acoustic guitarist Yuri Juárez, and saxophonist Laura Andrea Leguía. The latter’s originals, “Any Day Now” and “Amaranta” are beautiful and uplifting. The CD opens with an English language version of poet Kitty O’Meara’s hopeful work “And the People Stayed Home” – and closes with her narrating it in Spanish. It sure sets the tone for the full recording, which ranges in mood from chaos to calm. In his brief notes, Alegria writes that “every sound and rhythm on this album is an attempt to guide you safely away from the confusion of the 2020 pandemic.” It does that – and much more. 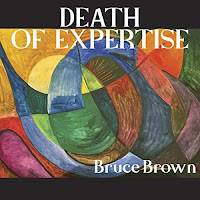 Singer-songwriter Bruce Brown’s work has the quirkiness, wry humor and social commentary associated with Bob Dorough and Dave Frishberg. And it is on full display here. The Los Angeles native, who has called Wellington, New Zealand home for the past 22 years, uses clever lyrics to tackle the foibles of modern life in an age overly consumed by the internet, the need for determination and positivity, the solace of music – and every emotion in between. The titles set the tone: Favorite gems: “Find Three Things to be Grateful For,” “A Mind is a Terrible Thing” (when it betrays you), “Back in the Day,” “We Click,” “Losers are People Too” and the uplifting spirit of “The Music Plays Again.” Then there’s the wry rhyming sarcasm of “Doreen.” Brown’s backing sextet gives him very fine support. 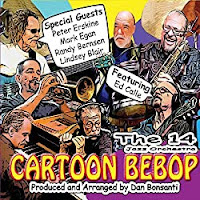 You won’t hear Dan Bonsanti on his trusty saxophone here, but you will hear the depth and breadth of his skills as a bandleader, composer and arranger in a project showcasing his South Florida-based ensemble, the 14 Jazz Orchestra. This time out, because of the pandemic, Bonsanti cast a wider net to include players who had home studios. Each instrumental part was recorded separately, and engineer Mike Levine pulled the tracks together in a way that sounds like all the players were together in the same studio. With a variety of substitutions and special guests (drummer Peter Erskine, bassist Mark Egan, and guitarists Randy Bernsen and Lindsey Blair), the little big band includes a rotation of 25 musicians on this latest project.

Now to the wide-ranging music. Bonsanti penned the opening and closing tracks, and arranged the nine others for his ensemble. The opening title track is built around the melody and sprightly flavor of cartoon theme music. There’s a bit of the “Theme from Rocky and Bullwinkle,” but your ears may also pick up hints of “The Jetsons.” Miami saxophone stalwart Ed Calle is the primary featured soloist on more than half of the tracks. He adds much, particularly to the band’s takes on Chick Corea’s “Got a Match?” and “Duende,” Leslie Bricusse’s “When I Look in Your Eyes” (from the movie “Dr. Doolittle”), and the closer, Bonsanti’s rollicking “A Day Tripper’s Blues Buffet.” Trumpeter Cisco Dimas dominates the band’s take on Airto Moreira’s “Misturada.” Guitarist  Bernsen solos on a beautiful exploration of Wayne Shorter’s epic ballad “Infant Eyes.” Calle, guitarist Blair and keyboardist Mike Levine are featured on Bonsanti’s teasing arrangement of Stanley Clarke’s funky “Dayride.”