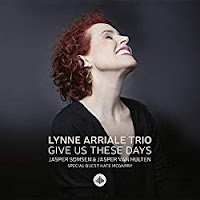 Lynne Arriale, Give Us These Days (Challenge)


Pianist Lynne Arriale’s playing is filled with passion and invention – and swings with a crystalline grace all her own. Her latest project was recorded last year in Belgium and New York with two Dutch musicians – bassist Jasper Somsen and drummer Jasper Van Hulten – whose empathetic support is superb. In addition to delving into six originals, Arriale puts her own delicate spin on Joni Mitchell’s “Woodstock,” Lennon and McCartney’s Beatles hit “Let It Be” and Tom Waits’ lament “Take It With Me.” Kate McGarry is guest vocalist on the latter track. Favorites: Arriale’s Flamenco-tinged “Appassionata” and prayer-like “Give Us These Days.” Arriale adds some quirky twists to the program on her uptempo “Over and Out” and Monkish “Slightly Off-Center.” 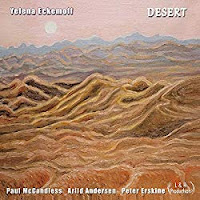 Yelena Eckemoff, Desert (L&H Production)
Moscow-born pianist and composer Yelena Eckemoff has a vivid imagination – imagining her own view of the multi-faceted Middle Eastern desert into one of the year’s finest jazz concept recordings. Desert is rich with musical influences from its land of inspiration – delivered artfully by Eckemoff and fellow sound travelers: horns player Paul McCandless, bassist Arild Andersen and drummer/percussionist Peter Erskine. Favorite tracks: “Bedouins,” the teasing piece “Mirages,” the sinuous “Dance,” “Oasis” and the unrelenting flow of “Dust Storm.” Eckemoff, based in North Carolina since 1991, also painted the impressionistic CD cover and included her own fictional stories and poems that complement each of the 11 tracks. The scope of the project and the delivery by this fine quartet are masterful. 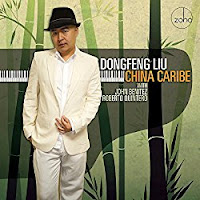 
Music is the world’s universal language – and pianist Dongfeng Liu underscores that notion in an ambitious and unusual way on his new CD. China Carib is just what the name says - a fusion of musical influences from the leader’s native China, bubbling Latin rhythms and jazz harmonies. With support from both Chinese and Latin musicians, Liu meshes the various musical influences and sounds into a seamless tapestry of originals.

The Latin musicians aboard are John Benitez on acoustic and electric bass, his son Francis Benitez on drums, and Roberto Quintero on percussion. Min Xiaofen performs on two lute-like Chinese stringed instruments, the ruan and the pipa, on three tracks. Feifei Yang plays the erhu, a bowed Chinese string instrument, on another. The Beijing-based Mongolian folk-rock band Hanggai adds its sound, including Mongolian throat singing, to the exotic opener, “In the Clouds.” Favorite track: Liu’s “Colorful Clouds Chasing the Moon,” which features Chinese melodies and strings over a propulsive Afro-Cuban beat. This one defies easy categorization, but it is exceptional from start to finish. 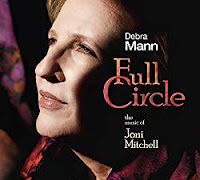 
Pianist and singer Debra Mann has been captivated by the Joni Mitchell songbook since she was in junior high school. The music has been ingrained in her all these years and, on this project, she celebrates it with a jazz twist without straying far from Mitchell’s originals. She and her fine southern New England band-mates give new energy to a dozen Mitchell classics, including the songwriter’s lyrics to Charles Mingus’s Lester Young elegy “Goodbye Pork Pie Hat.”

The band includes saxophonist Dino Govoni,  guitarist Jay Azzolina, bassist Dave Zinno and drummer Marty Richards. Pianist Paul Nagel and percussionist Jerry Leake join the project on two tracks apiece. Govoni and Azzolina turn in some solos for the ages, with the reed player soaring on “Black Crow,” “Gooodbye Pork Pie Hat” and “Woodstock.” Azzolina shifts between searing electric guitar and a more-subtle acoustic axe as the songs demand. No matter which Mitchell songs resonate most for a particular listener, these dozen re-arrangements and treatments are beauties. This is a dandy. 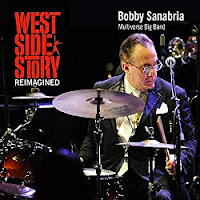 
The story of powerful love amid conflict and tragedy is the story of the human condition. Shakespeare built “Romeo & Juliet” around it – and Leonard Bernstein based his musical “West Side Story” on The Bard’s classic lover story. Drummer Bobby Sanabria has done Bernstein’s classic work great justice with the latest project from his New York-based Multiverse Big Band.

This powerful Latin jazz orchestra draws on the emotion and story line of Bernstein’s classic story of romance, dreams and love amid racism, bigotry – and the fear that cause the latter two traits. This reminder – through Maria & Tony, the Sharks & the Jets, and Officer Krupke – couldn’t have come at a more important time. The arrangements and the solos are top-notch throughout. The session was recorded in 2017 – the 60th anniversary of the debut of “West Side Story” and released in 2018, Bernstein’s centennial year.