Taking a look at new CDs by The Black Butterflies, Miles Donahue, Chuck Owen & The Jazz Surge, and Matt Wilson…. 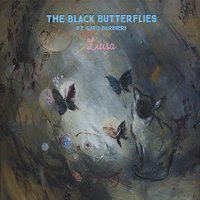 This third recording by The Black Butterflies, an eclectic, Latin-tinged group led by alto saxophonist Mercedes Figueras, is a gem - and a bit historic to boot. Figueras, a native of Argentina, was heavily influenced by the musicality of fellow countryman Gato Barbieri. Her sound shares a lot of the same brawn and take-no-prisoners firepower that were a hallmark of Barbieri’s distinctive tenor work over his long career.

Barbieri was a special guest on three tracks here: Figueras’ homage “Gato’s Hat” and “Brother Nacho, Sister Lola,” as well as Ramon Sixto Rios’ “Merceditas.” It turned out to be Barbieri’s last recording project prior to his April 2016 passing. Their intertwined tenor/alto saxophone duels are a thing of wonder, particularly on the session highlight, “Brother Nacho, Sister Lola.” The percussion-rich band here gives Figueras and Barbieri quite an exotic cushion with both samba and tango influences. Here’s another bit of history. The octet includes vibes player Karl Berger. He and Gato were part of the Don Cherry Quartet in 1965-66. 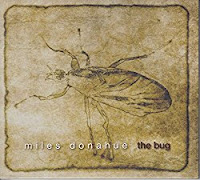 New England jazzman Miles Donahue is a musical force of nature. He composes, he teaches, and he is equally adept at playing trumpet and saxophone. His recordings are few and far between, so it is good to relish them when they do arrive. Such is the case with The Bug, which teams Donahue with saxophonist Jerry Bergonzi (a long-time collaborator), guitarist Mike Stern, pianist Tim Ray, bassist Tamir Schmerling, and drummers Ralph Peterson and Larry Finn, who split the timekeeping role. All nine tracks are Donohue originals.

Favorites: “The Bug,” “All Grown Up,” “Hawthorne Hideaway,” “Leaving Home” and “Clifford.” The title track showcases Donohue’s trumpet work and Stern’s distinctive, searing guitar. Donohue sits out to relish the interpretations featuring Bergonzi on “All Grown Up” and Ray on the solo piano track “Leaving Home.” Donahue (on alto sax), Ray and Stern dig deep into “Hawthorne Hideaway” and the boogaloo-driven “Swamp House.” Donahue was inspired by Bill Evans when he wrote the opening track, “Bill,” and the closer, “”In Three.” Donahue and Bergonzi are featured, on flugelhorn on tenor respectively, on the Clifford Brown tribute, as Donahue tips his cap to another of his mighty influences. This is a gem. 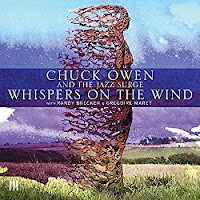 Chuck Owen & The Jazz Surge, Whispers on the Wind (MAMA)
This is the sixth recording by Chuck Owen’s Central Florida-based band, The Jazz Surge. The project, in essence, is a seven-part tone poem inspired by various aspects of the wide-open spaces of America’s heartland, where Owen grew up. The composer is a native of Omaha NE. The 19-member band is augmented for this recording by trumpeter Randy Brecker, harmonica player Grégoire Maret and violinist Sara Caswell.

Whispers on the Wind is inspired by cowboys, gunslingers, breathtaking vistas and the writings of Stephen King, Cormac McCarthy and Larry McMurtry. Aural imageries abound through each piece. The finest gems are “Into the Blue,” which features intense overlapping solos by Brecker and guitarist LaRue Nickelson, and Maret’s extensive spotlight on “Sentinel Rock,” a tribute to the Bryce Canyon landmark that toppled last year. The latter track also features alto saxophonist Valerie Gillespie. To add more of the folk/roots flavor to the project, Owen played accordion and hammered dulcimer on various tracks. 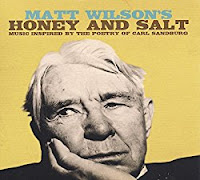 Drummer Matt Wilson’s newest project was without peer this year in concept and execution. Wilson wrote 18 tunes, each inspired by the works of Carl Sandburg, the “poet of the people” who died 50 years ago. Sandburg long has been an influence on Wilson, and both were born one town away from each other in rural Illinois. Nine of the pieces include guest readers who add Sandburg’s words. They include jazz musicians Christian McBride, Wilson, John Scofield, Jeff Lederer, Bill Frisell, Rufus Reid, Joe Lovano and Carla Bley. Sandburg’s own narration is featured on his poem “Fog.” Favorites include Scofield’s take on the whimsical “We Must Be Polite” and Lederer’s reading of “Prairie Barn.” That poem was a most-fitting inclusion. Sandburg wrote the poem about a barn that was owned by a relative of Wilson. The versatile drummer’s fine band included singer-guitarist Dawn Thomson, cornetist Ron Miles, reed player Lederer and bassist Martin Wind.
Posted by Ken Franckling at 7:34 PM